﻿﻿﻿
﻿﻿﻿      Puerto Rico is another of the Caribbean islands that has very unique attributes, relatively old historic sites, party sites and just plain sites.     I think about Old San Juan ( the walled city) and remember wandering through El Morro (Castillo San Felipe del  Morro), the largest Spanish built fort in the world.     This magnificent structure was named to honor King Phillip II of Spain, the fort also known as El Morro, or promontory, construction of the fort began in 1539 after King Charles the V saw the need to protect the entrance to San Juan Bay and San Juan.     He authorized it's construction including the surrounding walls and construction began.         50 later years in 1589 it was "completed".     The original fortress is only a small percentage of what you will see today when you visit El Morro.     Spanish control of the Island ended in 1898 when the United States Navy bombarded El Morro in the last battle during the Spanish-American War.     The United States fired it s first shots of World War I from one of the fort's batteries in 1915.     El Morro was turned over to the National Park Service after the U.S. Army moved out of the fort in 1961.     President Regan declaired the site a "World Heritage Site" in 1983, and in 1992 El Morro's resturation to it's 18th century  appearance was completed. 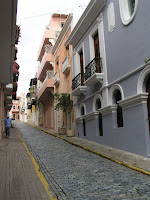 The walled city, Old San Juan, today is a wonderful place to wander with it's narrow streets and curious little shops, restaurants, and bars.   The strong Spanish architecture influence is easily apparent as you wander these cobble stone streets.     The restaurants serve everything from traditional Puerto Rican dishes to some exotic dishes from around the world.     Places like Dragonfly, The Parrot, or La Bombonera to name a few  provide you with the festive Spanish influence dining experience you expect in Old San Juan. .     Food is of excellent quality throughout Old San Juan and there are many choices for fun and colorful experiences.      There area wide variety of antique, curio, and souvenir shops dotting Old San Juan's streets, as well as some more modern stores.     The night life is abundant and the bars and night clubs to while away you evening hours and enjoy many of the Puerto Rican rums.

While in Puerto Rico, there are many distilleries that have tours that can be a real treat as well.     Bacardi, Don Q, or Ron de Barralito to name a few.     A week is hardly enough time to explore all of the historical, and fun thing to do in Old San Juan and Puerto Rico.     ;o)
Posted by Bahama Bob's Rumstyles at 9:41 AM No comments: