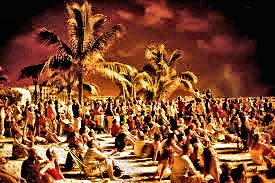 The way to celebrate the Fourth of July here in Key West is to take your boat or get on a charter boat that anchors off the White Street Pier on the Atlantic side and enjoy the fireworks.    This is a long adhered to tradition that I sure will be happening again tonight.    Many of the participants get their anchorage set up in the early afternoon and then the celebration and party begin.   The afternoon soon becomes the night time and the real party is underway when the fireworks brings it to life.    Many stay anchored for the night and the rest head back to their docks and anchorages in the marinas and mooring fields.   Either way it is a party that lasts until the wee hours of the morning. 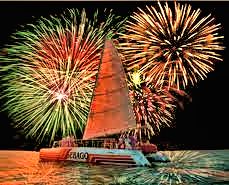 The boat parade, not officially a parade, but it really looks like a parade as they gather off the end of the White Street Pier.  many of them are rafting up and others achored solo, either way they are there to party.    The celebrating is audible for miles around and a great fun time is had by most.   This is always a fun and crazy Key West tradition of fun and frolic.   Lots of the revellers are on one of the many charter boats and others prefer to be on their own, but either way the waters are truly littered with almost anything that floats.     The real excitement begins though when the fireworks ends.  that is when the floatilla begins to head back into the marinas and anchorages at the same time.   It is a traffic jam of  epic proportions, usually not coming to an end until well after 2 in the morning. 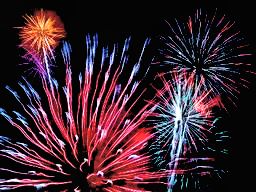 Others just park along the south side of the island and watch from the beaches or their cars, but you can bet that there won't be a parking spot anywhere on the south side tonight.  Even South Roosevelt Blvd. becomes a quasi parking lot and the travelers slow to a snail's pace to watch as they search for a parking spot.

No matter where you watch from, the show is always a great one and this year I'm sure will be no exception.   Where will I be, well as usual I'll be on the second floor patio of the Hurricane Hole and enjoying the show without having to endure the crowd on the water.  You can bet that I'll be headed home the minute it is over to avoid the rush down Cow Key Channel after the show.  There are way too many boats coming through the channel after the show and hopefully, I'll be safe back at the boat in Sunset Marina before the rush gets underway.   No matter how you celebrate the Fourth of July, do is safely, I need my readers back on the "fifth" tomorrow.  ;o)
Posted by Bahama Bob's Rumstyles at 9:02 AM 1 comment: