The Elusive Rum Runner: The Cocktail

The rum runner like it's namesake is an elusive entity and like it's namesake the origin is a bit fuzzy.  The Holiday Isle Tiki Bar in Islamorada, Florida takes the credit for the creation of the rum runner, but like it's namesake and coming from the Florida Keys has a bit of a shady past.  The original recipe was said to come from the 1950's when the barmen had an excess of rum and other liqueurs that had to be moved before the new inventory could be put into storage.

The only problem with that story is that the Holiday Isle Tiki Bar started serving cocktails from a bar know as the Hapi Hula Hut in 1969 and the original hotel owner had challenged "Tiki John", the bar manager to  invented the "Rum Runner" from the excess inventory in 1972  I have to  believe that the second version is the real story.

The original recipe hasn't changed much over the years, but there are a few different variants out there.  The original was a frozen cocktail, but the more popular one at least in Key West is the "on the rocks" version.

Place all of the ingredients into a blender with 2 cups of ice and blend until smooth.  Pout into a "Hurricane Glass" and garnish with an orange slice and if so inclined float with Bacardi 151 rum.

I have my own ideas on the subject, but they are not really that different.  I think that the frozen version makes the cocktail taste very watered down, then add the fact that I avoid grenadine at all possible means.   Here is my version of the cocktail that I serve at the Rum Bar in Key West. 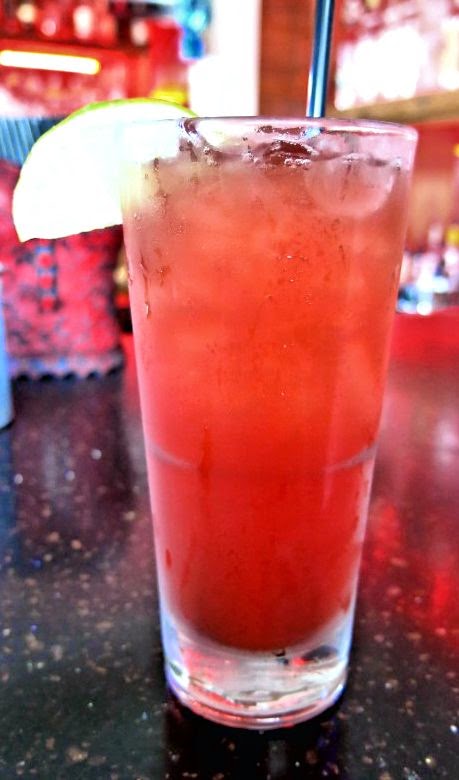 Bahama Bob's Run Runner
Place all ingredients is a 12 oz. tumbler filled with ice and shake until mixed. You can float a good aged overproof  rum like Lemon Hart 151 or Plantation Overproof if you desire.  Garnish with a lime slice.

Either version is really good, so give one a try and enjoy the "Cocktail of the Keys".