Getting the Second Day Underway: Looks Like a Very Interesting One

The second day of judging rum and meetings with Wicked Dolphin, Puerto Angel and Skotlander rum companies.  Rum Line this evening also looks like it is going to be offering an interesting visit.

The breakfast meeting with JoAnn Elardo, founder and owner of Cape Spirits, the producer of Wicked Dolphin Rums.   She shared with us the history of Cape Spirits and how she came to the point where she was ready for such an endeavor.   Wicked Dolphin is doing such a great job of producing so many straight ahead and honest expressions these days.  Their 3 year old Gold Reserve, the new Black Rum, The Brewers Series and the Hidden Barrel are fine examples of the expressions that are coming out of Wicked Dolphin these days. 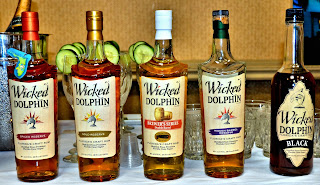 All of these rums are being rested in large 53 gallon former bourbon casks, aged in the traditional manner.   The Brewer's Series spend 2 years in the bourbon casks before being moved to the barrels from the brewery for an additional year.  All of the rum is fermented, distilled, and aged at the Cape Coral facility, they are not out sourcing any of the rum and blending them with their own.  They are in the midst of experimenting with other types of barrels and sugars as well, the results will be available in the near future.

Today's first round of judging was 17 flavored rums.  Thee can be some of the toughest to evaluate.  It is so hard to move from one to the next and cleanse the palate enough to get the previous one's flavors to go away before you start on the next one.   This was some of the best flavored rums as a group that I have evaluated in this category.  Much more sophisticated that in the past. 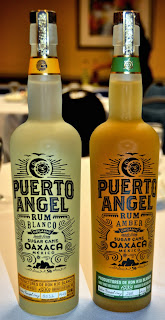 Our lunch meeting is with Patrick Wilson of Puerto Angel Rum from Oxaca, Mexico.  This is a USB Certified organic rum, made from organically grown sugarcane from the 6,000 foot level just outside of Oxaca.  Oxaca is a rural mountain town where

things move slowly and the sugarcane gets to the distillery by mule.   Nature starts the fermentation process without the addition of yeast to get it started.  This is a naturally occurring yeast rather than a cultivated yeast.   The rum is aged in new American Oak barrels. The Blanco is aged for 90 days and the Amber for 3 years. Both of these rums are available in a good number of states here in the United States, so check with your favorite store to see if they have it on the shelf.   The Blanco will retail at $20 and the Amber at $22, both are priced right to sip or create your favorite cocktails with.  Blanco will make a great t punch or daiquiri.

The final judging session of the day was one of the tougher ones.   It starts with the single vintage rums, which are very nice, then moves to the spiced rums which isn't too bad either.  The killer comes at the end when the throw six overproof rums at you to end the session.  I love the overproofs, but after three my tongue had become somewhat numb, and after six I couldn't feel my lips , nose or the back of my throat.  The flavors were great with all of them, but the numbing was a bit weird.  Only two sessions left and we have completed the judging.


Next the 5 pm meeting with Skotlander Rums.  Titte Hansen is the inspiration behind this unique rum that is produced entirely in Denmark.  I brings in the molasses, ferments it , a process that takes about a month in the chilly atmosphere of Scandinavia.   The wine is then distilled in his pot still and aged in oak.  Their # IV rum is placed on an old schooner and travels around the Danish Sea for approximately 1400 nautical miles, with the rolling seas helping to get more of the rum in contact with the barrel.  This one is bottled at 43% ABV and has a wonderful bold flavor.
The first year they produced 1000 bottles of rum and were concerned that they might have to drink it themselves, but things have gone very well and this year the will have produced 10,000 bottles.  This is a great thing for some wonderful people,  Skotlander rum will be in the United States soon and available online in most states. 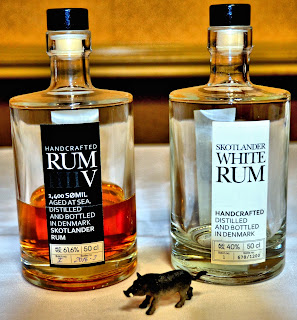 Posted by Bahama Bob's Rumstyles at 5:54 AM No comments: