Pirate Rum Party. What a Concept. 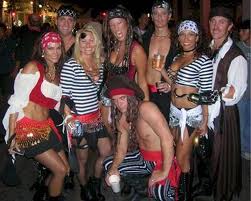 The idea of a Pirate Rum Party this time of year is one that really can't be beat.     The weather is getting cool, Halloween is just over the horizon and it is time for the first real party of the fall season.     Pirate Rum Party's have all the potential for a great fun night or afternoon.     Take a group of friends dressed in pirate garb, punch bowl full of rum punch of some sort, great pirate games, and it is underway.

The games can include thing like rope the Wench or Cabin boy, Liar's Dice, or even original costume contests.   All can make for a fun night of revelry.    If you have a charity in mind for your party a Wench and or Cabin Boy Auction is always  a great event.

The center of a Pirate Rum Party is the Rum Punch and a great rum punch can make the party something very special.     Rum Bumbo or Bumboo , a popular drink in the Caribbean during the era of piracy, primarily because it was better tasting than the Royal Naval Grog.    Because the pirates short-haul merchant men didn't suffer from scurvy as often as the British Sailors did, meant they could drop the citrus from the grog and be replaced with sugar and nutmeg to sweeten the mix.     Bumbo was often used in the election campaigns in Colonial British America , this tradition was know as "Swilling the Planters with Bumbo".     George Washington in his papers stated that he had used some 160 gallons of rum to treat some 371 voters while campaigning for the Virginia House of Burgess in July of 1758.

Mix all the ingredients in a large punch bowl , place a large block of ice in the bowl.    Sticks of cinnamon and the Nutmeg nuts that you ground on can be floated in the punch bowl along with slices of tropical fruits.

Now you have the concept it is time for you to put the plan into action for the Halloween season.     This is always a fun and successful event when it is put together with zeal and enthusiasm.     ;o)
Posted by Bahama Bob's Rumstyles at 9:18 AM