The Spirit Business has just announced the winners of the "Brand Champions of 2016.  For the rum category in general, it has not been a really good year, with the exception of Appleton Estate, the other large international producers has posted a loss in sales.  The rum category is undergoing a huge change these days to bring more premium expressions to the market place.  Whiskey is strong right now and it is a great time for the rum people to step up to the next level and bring some attention back to the world of rum. 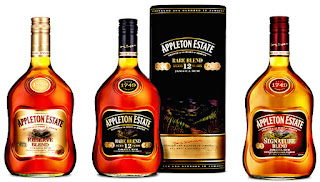 Gruppo Campari’s Appleton Estate was one such brand and was the only international rum to witness any growth last year, after four previous years of flat-lining volumes. The Jamaican rum benefited from a new naming classification and packaging redesign for its core range.   “In addition, our markets also introduced a number of exciting initiatives that focused on educating both bartenders and consumers on premium rum and what makes Appleton Estate so unique,” claims KK Hall, director, global strategic marketing – rums, at Gruppo Campari.
“Rum is one of the key major spirits categories that has not demonstrated significant

premiumisation on a global level,” continued Hall.   “The advent of new brands in this premium space, coupled with the increased level of trade and consumer education, lends to our strong belief that the time is ripe for the category to premiumize, and we intend to get our share of this action.”

McDowell’s No.1 Celebration, meanwhile, has clung on to the world’s best-selling rum title despite losing volume and Bacardí – rum’s former number one – continued its decline. In total, the brand has lost almost 2.5m cases since 2012.
Read More at http://www.thespiritsbusiness.com/2016/06/rum-brand-champion-2016/

Posted by Bahama Bob's Rumstyles at 6:03 AM No comments: