When you think about countries that produce rum, you rarely think about Australia, but you are in for a real surprise just how much rum is being produced there.  Most people think that Bundaberg is the only rum from Australia, but that is completely wrong.   Bundaberg and Beenleigh have a long and popular tradition here since the 1880's. Today, their product innovations are producing some outstanding expressions.  From pirates and buccaneers to convicts and pioneers, these are what made Australia, and from these very colorful people they have been making rum for nearly 190 years.  The home of the Rum Rebellion in 1808, today it is a serious producer of rum.
"Raise your rum." This chant is growing louder as rum undergoes a vibrant resurgence.
"The West Indies may be the birthplace of rum 375 years ago, yet we've been making rum here for 190 years. Rum has always held a special place in Australia, instead of pirates and buccaneers we started with convicts and pioneers. Our Colonial spirit grew up with us to be one of Australia's favorite spirits, and now it's drunk by everyone from the rebellious to the adventurous."

Stone Pine Barrique Rum (40% ABV) is made from blackstrap molasses which are fermented and distilled in small batches. The rum is matured in medium toasted barriques, (225L ex-American oak casks) which give a lot of contact with the wood and imparts a massive influence on its character.  Stone Pine Barrique Rum No. 3 has a complex mouthfeel with notes of vanilla, coconut and burnt caramel with a medium length and oaky finish on the palate. Sip neat to savour its complexity or top with dry ginger ale, a wedge of lemon and ice.   Stone Pine Barrique Rum is available in 375ml and 750 ml bottles.

Mt Uncle Distillery in Cairns, Queensland comes FNQ Rum Co Iridium Dark Rum (40% ABV), the first and only premium cane spirit rum in Australia. Triple distilled in a copper pot still, the single barrel aged rum is made from 100% Far North Queensland sugar cane syrup, not molasses.   The distillate is filtered through Cairns Highland’s volcanic rock which purifies and enriches the spirit and in turn gives it a smooth mouth feel. The rum is aged just over 4 years in American oak casks that previously held red wine which give the rum its distinctive copper/amber color.  The imagery on the 700ml bottle of Iridium Dark Rum depicts the tropical reef and rain forest of Far North Queensland. On the nose, there’s spice, vanilla and nutty aroma with toffee apple on the palate with cinnamon, spice, toasty oak, and a lingering caramel finish.

Hoochery Distillery in Western Australia comes Ord River Rum Overproof (56.4% ABV).  Hoochery Distillery is the oldest legal still in Western Australia. Located in Kununurra in the Kimberley region, it is a 100% Australian owned and operated family business. Ord River Rum is made from local sugar cane, wet season rainwater and yeast that is vat-fermented, pot-distilled, aged and hand-bottled. The rum is charcoal filtered, aged in 300 liter American oak barrels which impart natural color and flavor. The small pot distillery has the capacity to produce over 50,000 bottles of Ord River Rum a year.  Ord River Rum Overproof is full-flavoured, with notes of vanilla, fruit, dark chocolate, spice and brown sugar with an oaky and smooth finish. the rum is available in a 750 ml bottle. 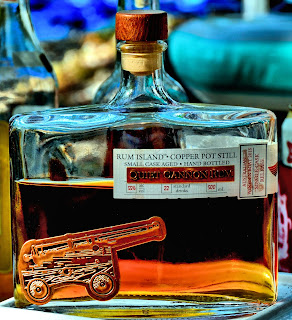 The best known of the Tasmanian rums, a heavy pot still spirit combined with single barrel aging in an ex-Port, ex-Whisky quarter cask to produce a high-ester bouquet that fills the air around you. Quiet Cannon has an immediate, bold presence on the nose, presenting aromas of fermented molasses, whisky, fresh tobacco, overripe burnt peaches, dark chocolate, charred wood, burnt leather and a shy floral delicacy.  The esters understandably dominate the rum’s bouquet and can interfere with its more attractive aromas if you aren’t on your guard.  Approached carefully, Quiet Cannon delivers aromas in great quantity, as the name suggests it should.  The initial taste is equally powerful, though slightly sweet and dry initially due to the spirit’s 50% ABV overproof nature, followed by intense flavors of grain, wood, peat, and lesser versions of what is revealed on the nose.  As expected, the rum is full bodied with an almost oily texture and a long, dry, finish rich in flavor.  Quiet Cannon is a Scotch-and-cigar lover’s rum.

Situated in the heart of the Swan Valley, The Great Northern Distillery is the producer of some of WA's finest spirits and liqueurs. Our internationally acclaimed Canefire Rum is just the beginning of this Boutique Distillery experience.   Small Batch, a limited 500 bottle release from our very light barrels.  Instead of being cut with water, White Port from a local valley winery is used.  It is bottled unfiltered at 40% ABV.  At the tasting bar; watch our friendly staff prepare a range of cocktails for your enjoyment made from our rums or you can simply sample a measure of our fine rums.

These are a few of the quality cane spirits that you can find from Australia, if you get the opportunity give some of these a try, you won't be disappointed.
Posted by Bahama Bob's Rumstyles at 6:15 AM No comments: