And Now the Rest of the Tiki Story: Trader Vic 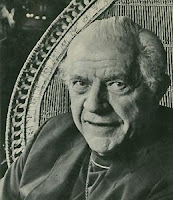 Victor Jules ( Trader Vic) Bergeron, born December 10, 1902 in San Francisco, became the most successful of the Polynesian style restaurateur's of the era.      The friendly competition between Trader Vic and Don the Beachcomber really kept the Tiki scene alive for so many years.     Trader Vic is credited with creating the first successful themed restaurant chain in the world.    In 1974, Bergeron also after putting Polynesian food on the map in his restaurants, wrote a book called "Rum Cookery & Drinkery".     This is the history of rum and the different ways that it can be used and served.    and discussions of the recipes that he found that had been passed down for generations.     This is only one of the many books that he wrote during his 81 year lifetime.

Bergeron attended Heald College of San Francisco, and upon graduation he was able to borrow $500 and open "Hinky Dinks" a small bar and restaurant located across the street from his parents grocery store at the corner of San Pablo and 65th Streets in Oakland, California.     The little restraint grew and as it became more and more popular, the menu and cocktail list became more tropical and the name was changed to "Trader Vic's".     Bergeron franchised the first Trader Vic's in Seattle in 1940 and at the peak of the Tiki era he had 25 franchises all over the world.     The Polynesian artifacts, exotic cuisine and the unique tropical cocktails were the cornerstone of the chain's popularity. 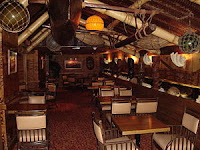 As a young man in the sixty's I do remember the era when the Tiki lounges were all the rage and having many a great night in Hawaiian garb and leis.     It does my heart good to see the revival of the Polynesian themed venues appearing again in my lifetime.    ;o)
Posted by Bahama Bob's Rumstyles at 9:09 AM No comments: