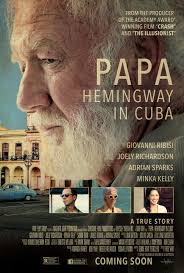 The new movie Papa: Hemingway in Cuba has just been released in the theaters.  This reminds me of so many places that he would hang out in Havana, San Francisco de Paula and Cojmar, Cuba. The film relates a story of a young journalist that ventured to Havana in 1959 to spend some time with his idol.    Roger Ebert made this comment on the movie.  “The script was written by Denne Bart Petitclerc and was based on his own experiences with Ernest Hemingway, whom he befriended as a young journalist. Petitclerc passed away a decade ago, and he would’ve been thrilled to learn that the long belated project would become the first Hollywood film shot in Cuba since 1959, and that various scenes would be shot in the locations where Hemingway once resided. Even Mariel Hemingway, the writer’s granddaughter, turns up in an all-too-brief cameo. These behind-the-scenes factoids are the most interesting aspects of the film—and, regrettably, the only interesting aspects, as well.”   Read More at http://www.rogerebert.com/reviews/papa-hemingway-in-cuba-2016

Earnest Hemingway loved his life in Cuba,  pre-revolution Cuba, in particular.  Nothing made him happier that big game fishing in the Caribbean, Cuban cigars, and Great Cuban Rum.   Although he didn’t drink his rum straight, his daiquiris, made with a higher quality Cuban rum.   During the 50’s most of the rough “Kill Devil” rums of earlier eras were gone and replaced by smoother, sweet, white expressions crafted to accommodate the cocktail craze currently of the new era.  Hemingway embibed at the El Floridita, this was his favorite Havana watering hole.  There he was served his self-created daiquiri, known as the “Papa Doble” This was a very clean sugar free version of the #4 El Floridita Daiquiri that was sans sugar and double the rum, thus the name.
I have had the privilege to visit so many of the haunts that where Hemingway spent his time in Cuba, and I couldn't help to wanting to have seen myself walking and spending time in that era in Cuba.  Great shows, cocktail lounges, fine rum and cigars.   From the Ambros Mundos where if first lived when in Havana and wrote For Whom the Bells Tolled, to Finca la Vigia, his beloved villa in San Franciscio de Paula. This was a place to be if you wanted to live the "high life" that was filled with the excitement of the Caribbean.  I am looking forward to seeing the film and see ho well they did bring us back the early fifties in Havana.

Posted by Bahama Bob's Rumstyles at 6:04 AM No comments: