Key West Is Second in the "Most Trashy" Spring Break Destinations

Key West finished second to Las Vegas as the "trashiest " destination for Spring Breakers in Neal Lynch's survey for 2012.

The 10 trashiest U.S. cities for Spring Break (and Florida is home to five of them)

By DAILY MAIL REPORTER
America’s 'Top 10 Trashiest Spring Break Destinations' have been revealed in a list of cities college students want to visit most - and their parents want them to visit the least.
Las Vegas has been crowned number one most trashiest Spring Break destination, it may not have a beach but it is the home of gambling and strip clubs.
Florida was the state to make the most appearances on the the list with five cities being listed in the top ten; with Key West coming in at second place. 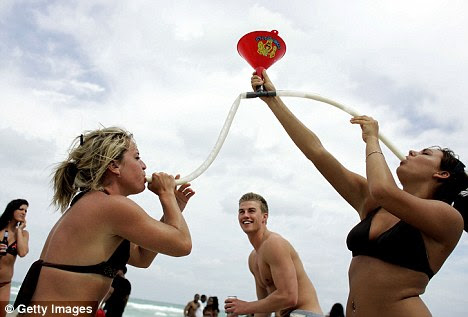 1. Las Vegas:  Home to gambling, strip clubs and the only Hooters Hotel. Vegas makes up for not having a beach with its popular pool parties.
2. Key West, Florid: Garden of Eden, a clothing-optional bar, is a spot the site recommends.
3. South Padre Island, Texas: Coed says 'How can it get any trashier than South Padre, a beach that essentially exists for the sole purpose of having wild parties?'
4. Daytona, Florida:  This city’s high number of underage-drinking arrests helped win it a spot on Coed’s list.
5. Myrtle Beach, S.C: Coed makes a distinction between North and South Myrtle Beach and advises that if it is trashiness you’re after,  South Myrtle beach is where you want to be.
6. Miami Beach: The online magazine points out that The Jersey Shore taped a season here.
7. Panama City Beach, Florida:  Coed, again, uses the reality to show to measure the trash factor, saying that stars from the Jersey Shore were among last year’s celebrity visitors.
8. Fort Myers, Florida: Lana Kai hosts a daily 'booty contest' during high season.
9. Lake Havasu, Arizona:  A tattoo convention is held during Spring Break. According to the site, Kokomo Havasu and Martini Bay are two of the trashier destinations.
10. San Diego:  'We know that most of the people who live in the San Diego area head to other destinations for Spring Break,' Coed writes, 'but that just means the people left partying here are extra trashy.'
Neal Lynch, the site’s editor in chief told ABCNews.com, 'Typically, people associate “trashy” with things of poor quality, however we associated the word with enjoying guilty pleasures. Like reality television — but in real life,where you can have the most amount of fun with the least amount of money.'
Lynch admits however that a fuller wallet may be necessary to enjoy the full experience at the number-one destination on his list.
Read more: http://www.dailymail.co.uk/news/article-2098799/The-10-trashiest-U-S-cities-Spring-Break-Florida-home-them.html#ixzz1lz5kr64f 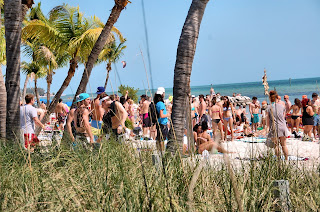 It has been my experience that Key West has earned it's title, based on Neal Lynch's explanation of what he meant by "Trashiness".

I know that spring break is just a few weeks away and if this year is anything like the past few years it is going to be a fun time again in Key West.    I think it is the laid back vibe of accepting of people that makes Key West so popular with the spring breakers.   It is OK to party, it is OK to act a little crazy, it OK to drink (providing you are old enough), and it is OK to just have a great time down here.    I guess what I am really saying is that for a lot of us here in Key West that haven't gotten "too old", spring break is still a fun time that most of us enjoyed in our college days and a tradition that should be enjoyed by the kids today.

The attraction to Key West, at least in my interaction with the breakers has been on of mutual respect and the ability to have as much fun as they are.    2012 is nearly upon us and as for me I can only say "Bring it on", let the party begin.     ;o)


Posted by Bahama Bob's Rumstyles at 8:38 AM No comments: