Vapor Cocktails Making a Come Back

On my latest trip to Grand Cayman Distilling, I found a curious item in their gift shop.  It was a Vaportini Kit that caught my attention.   Of course I bought it and took it home to try this idea.   I found this to be an interesting experience sucking vapors through a straw and enjoying all of the flavors of some of my favorite rums and still enjoying the buzz without actually drinking the liquid. 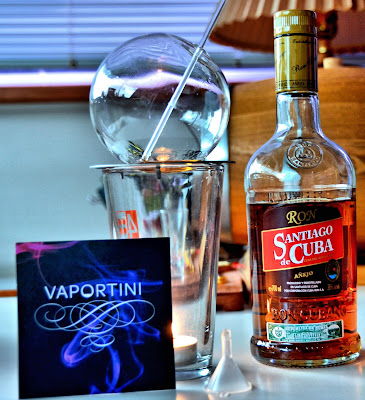 "Vaportini provides a revolutionary way of consuming alcohol.  It is inhaled rather than swallowed, smooth and flavorful, and the subtleties of the rum used are apparent.   It is absorbed directly into the bloodstream.   The advantage is there are no calories, no impurities and the effects are immediately felt; thus it is easier responsibly imbibe"

Molecular mixology has fallen out of vogue lately, having been called overly flashy and and unavailable to the masses.   There seem to be signs that it might be seen again in the near future.   Vapor mixology reached its apex  during the era between 2012-2014, several elite bars trying it out with edible cotton clouds that evaporated when liquid was poured over them, to side portions of popping candy.  I find that if there was a way to pour your rum into a safely warmed globe and draw off the vapors orally to an instant flavorful buzz, this might be a cool thing to offer the customers.