The Lord Clive Shipwreck may Yield Large Cache of Rum


﻿
Plans to raise a the Lord Clive, a warship sunk on January 6, 1763 could possibly yield a large cache of rum according to Rubin Collado, Argentine treasure hunter who first discovered the ship in 2013.   This cache of rum could bring a huge bounty based on the prices gotten for the Harewood Rums sold a few years ago.
The wreck of the Lord Clive – which was destroyed by Spanish cannon fire during a botched attack on the city of Colonia del Sacramento.    The Lord Clive received unexpected strong resistance from the city gun battery. After three hours of fire exchange, a fire declared on the Lord Clive, it quickly spread and the ship blew up and sunk immediately . There were 272 fatalities on board, including the expedition's commander Captain Robert McNamara. 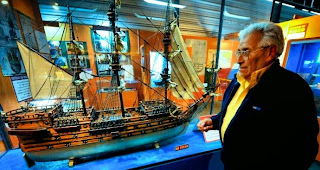 Long buried under rocks at the bottom of the River Plate, the contents of the ship are unknown, but tales of treasure chests and vast stocks of rum have prompted a frenzy of interest, according to the veteran Argentinian explorer who found the ship and is now raising funds for the recovery.
“Many people want to stake money, since they enjoy this kind of thing. It’s like gambling, you put in $1,000 and you could make $5,000 or $1m, depending on what shows up,” Rubén Collado told the Guardian.
Read More at http://www.theguardian.com/world/2015/may/15/wreck-british-ship-uruguay-treasure-millions
I will be interested in following the outcome of the exploration and the recovery to see what exactly that this ship really yields and if any of the rum has remained drinkable after being submerged for some 252 years.   If it is still good it will help the cause for submerged aging of rum again.   ;o)
Posted by Bahama Bob's Rumstyles at 7:00 AM No comments: