"It is U.S. policy to tax rum producers like Diageo and Bacardi nearly $14 for every gallon of rum they make outside the country and sell in the U.S. But the tax is merely a gimmick that gets reinvested in the Virgin Islands and the Puerto Rico in the form of aid. The alcohol industry's more than $13/per gallon kickback has been extended as part of the fiscal cliff negotiations. Pro Publica estimates the tax break gives Puerto Rico and the Virgin Islands a total of $480 million in aid for rum production."
read more at http://www.usnews.com/news/articles/2013/01/02/fiscal-cliff-pork-asparagus-nascar-rum.

It seems that here we are in a fiscal disaster and we still don't want to give up feeding the $480 Million for the rum cover over tax program that is causing so much problem throughout the rum producing world.     It would seem to me that the money could be better spent investing in American rum producers not only in the Virgin Islands and Puerto Rico, but those within the boarders of the United States proper.   This is a one sided program that is a direct aide of money to these companies and not just a tax break that was offered to so many other foreign corporations that have opted to build plants here in the United States.

"Prime Minister Freundel Stuart made this clear as he spoke with members of the media following a tour of Foursquare Rum Distillery in St Philip on Friday."


"Stuart disclosed that, at present, Puerto Rico and the US Virgin Islands were able to purchase products much cheaper than Caribbean rum producers and, as a result, this gave them an unfair advantage as far as their rum exports were concerned. He said this matter was engaging the attention of CARICOM states and was being "actively" addressed." 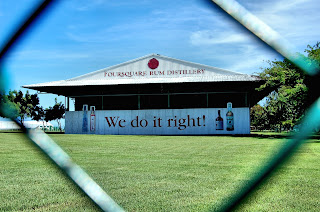 He added: "The rum industry is too important to Barbados, and yes it is a CARICOM issue, but I don't think any CARICOM country has any reason to be as concerned about this as Barbados. Rum is assuming an importance for Barbados that we cannot afford to ignore. So, this is a front burner issue and we are following it very closely."


"The prime minister disclosed that he recently held lengthy discussions with the US Assistant Secretary of State on the matter and also met with Barbados's ambassador to Washington, John Beale, as well as Barbados's ambassador to CARICOM, Robert &lsquo;Bobby' Morris. Furthermore, he explained that Barbados's ambassador to Geneva, Dr Marion Williams, was also looking into the issue."
It seems that the issue keeps falling on deaf ears here in Washington, D.C., I wonder what it will take to wake up the congress to an issue that is not only hurting the rum industry as a whole, but the rum producers within the United States as well who are paying an excise tax to the Federal Government.   After a promise to help the "middle class" in the less than 2 month ago elections we are hand $480 million off to be invested in companies that are not even American companies.