After New Years, thing have slowed down and a great dinner must be finished off by a really nice after dinner cocktail.  I had an idea for a sweet tart sweet idea that has worked out very well.  The sweetness of an Oloroso barrel finished rum, the tartness of an Italian Amaro and a touch of a cinnamon honey syrup leave your palate feeling like you just ate a decedent dessert.   The flavors work very well together like a great dessert. 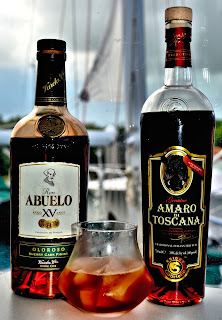 
Place all ingredients into a shaker and shake until thoroughly chilled.  Strain into a rocks glass filled with fresh ice.


Place all ingredients except the water and cinnamon in a pan and heat at 375 degrees stirring until all melts into a liquid.  Slowly add the water and bring to a boil.  Add Cinnamon and reduce heat to 230 degrees and bring to a slow boil and continue stirring for 5 minutes.  Pour into a dish that will not melt or crack and place in refrigerator for about an hour.  Pour into a dispensing bottle and put into refrigerator until ready to use.