Thursday Marks 80 Years since the Repeal of Prohibition 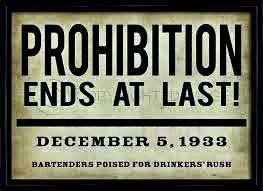 It is hard to believe that 80 years have passed since repeal.   It took until 1966 when Mississippi finally repealed its ban on the sale of alcohol with in the state's borders to fully bring Prohibition to an end.  I question how much that we have learned from the "Noble Experiment", we still ban the sale of Marijuana in all but a few states, and it is the criminal element that make all of the profits instead of the store owners and the government through taxes.  Instead we spend billions trying to stop something that the public, "We the People" want and enjoy. 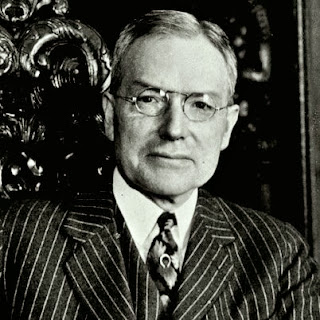 John D. Rockefeller, Jr. a steadfast supporter of prohibition had to admit that it was a failure.

“When Prohibition was introduced, I hoped that it would be widely supported by public opinion and the day would soon come when the evil effects of alcohol would be recognized. I have slowly and reluctantly come to believe that this has not been the result. Instead, drinking has generally increased; the speakeasy has replaced the saloon; a vast army of lawbreakers has appeared; many of our best citizens have openly ignored Prohibition; respect for the law has been greatly lessened; and crime has increased to a level never seen before.” 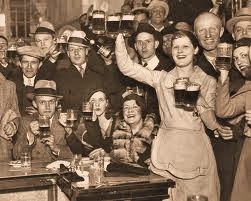 The only gains made from Prohibition were made by organized crime.  Groups like the Mafia who had limited their activities to prostitution, gambling, and theft until 1920, when bootlegging as an organized business emerged in response to Prohibition.   A profitable, often violent, black market for alcohol flourished throughout the era.   Powerful criminal organizations corrupted some law enforcement agencies, leading to widespread racketeering.   Prohibition provided a financial basis for organized crime to flourish from the beginning until the end of the era.
It is not clear whether Prohibition actually reduced individual consumption of alcohol.   Some historians claim that alcohol consumption in the United States did not exceed pre-Prohibition levels until the 1960s; others claim that alcohol consumption reached the pre-Prohibition levels several years after its enactment, and have continued to rise.  In the decades after Prohibition, Americans shed any stigma they might have had against alcohol consumption. According to a survey conducted by Gallup, almost every year since 1939, some two-thirds of American adults age 18 and older drink alcohol. 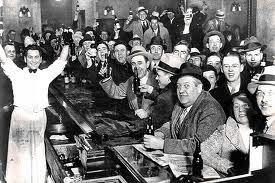 I hope that soon the government of the United States will wake up to the waste of tax payer dollars they are spending  in today's prohibition of marijuana and start to follow the lead of several states and put the product under alcohol like controls and make money from its sales instead of spending monies the government doesn't have, trying to prevent the use of something the people are going to go underground and by anyway.
Celebrate 80 years with us on Thursday of the repeal of the "Noble Experiment" and raise a glass to freedom of choice.   ;o)
Posted by Bahama Bob's Rumstyles at 8:37 AM No comments: