The spirit of the  Copa is back, and will be in full swing with the introduction of a new rum named for the famous beach in Brazil and the night club in New York City.   This is a collaboration that include some very knowledgeable people in the rum and restaurant industries.    Don Pancho Fernandez, Chef Alex Garcia and Spencer Rothschild have teamed up to create this new rum expression.
﻿      The rum is a golden rum created by Don Pancho Fernandez, which he describes as a 7 year old  blend that is a full bodied sophisticated rum. Copacabana 1940 is aged in white oak and has notes of orange citrus and butterscotch.


"After many years traveling the world to source the finest rum, I am thrilled to introduce New York to Copacabana 1940 Añejo rum" says Rothschild. "I am so proud of the experts that have come assembled to create an añejo rum worthy of bearing the name of the most famous nightclub and beach in the world." 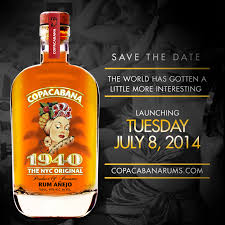 Chef Alex Garcia and Spencer Rothschild, of  Barrio Spirits are introducing Copacabana 1940, to the restaurant and spirits people at an official launch event on July 8 at the iconic Copacabana Nightclub.
Today this rum is only available in New York, but when it becomes available in Florida, you can bet it will become the newest member of the collection at the Rum Bar in Key West.