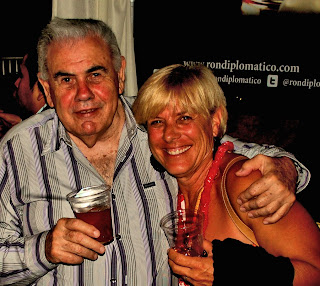 One of the latest of the new rums from master blender Francisco "Don Pancho" Fernandez, Panama Red is a wonderful sipping overproof rum and one that is a must for you overproof collection.     Don Pancho is famous for his long standing as a master blender beginning in Cuba and later in Panama and throughout Central America.   This his latest creation is a real masterpiece that I find to be a must in my Rum Lab as well as on the list of fine sipping rums.

The name comes from a legendary bar maid and entertainer named Carolina Cansino, of Spanish decent and the daughter of very talented parents, she became known far and wide for her performances at her magnificent bar and show lounge named Cantina Roja's.     The American sailor and soldiers from the Canal Zone became regular customers and later nicknamed Carolina "Panama Red" a name that she graciously accepted in reference to her long and beautiful auburn hair.   Most of the patrons would come to see her perform and ogle her beauty as she performed on the stage of her club.   Cantina Roja's had become the "in place" in Panama and found many a celebrity showing up there on any given evening.   Ernest Hemingway and his wife, Martha Gelhorn, or even John Wayne was said to have made an appearance there. 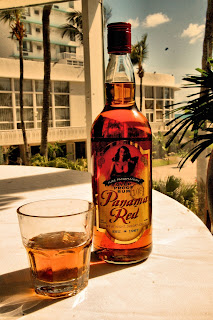 On to the Rum, this is an auburn colored overproof rum of extraordinary quality.     This rum has character unlike the majority of overproof rums and big bold flavor that is truly unique.   This rum is a great overproof mixer for cocktails like Hurricanes or Zombies  where a big bold overproof can really bring the cocktail to life.    This rum has a unique Panamanian flavor that really excites the palate and finishes very smoothly if you can call 108 proof rum smooth.   I really enjoy good overproof rums, and find them so flavorful, something that is missing from many 80 proof rums.   A cube of ice or a little bit of water will open up the flavors and tame the afterburn a bit making the rum easier to sip.     Taking very small sips and spending the time it takes to enjoy the big flavor, you'll find this a very rewarding experience.   ;o)
Posted by Bahama Bob's Rumstyles at 8:40 AM No comments: