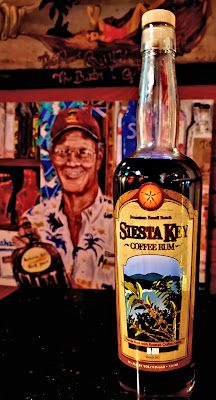 Troy Roberts and his crew have done it again with the introduction of Siesta Key Coffee Rum.  This is in the same vein as their famous toasted coconut expression.  The results I had the chance to taste at the Rum Bar in Key West, a coffee rum that tastes just like a fine cup of black coffee, not some sweetened rum with imitation flavorings.  How does he get all of this flavor in a rum?

The concept is actually very simple.  He makes it the same way a cowboy would make his coffee, he puts the grounds of his coffee blend directly into the rum and let it infuse the flavor to the rum.  This reminds me of how he puts the toasted coconut into a tea bag like apparatus and let it sit in the rum until the flavor is infused.  When the coffee flavor is right, the grounds are filtered out and the rum is ready to be bottled.

This could have been accomplished by using some prepared syrup, but Troy believes in using natural flavors and ingredients to bring such full and satisfying flavors to his rums.  The real good news is that you would have to drink a whole bottle of this rum to get the amount of caffeine that would be present in one cup of coffee.

If you are a coffee drinker and like the flavor of a good cup of coffee, this is a really great new rum for you to give a try.
Posted by Bahama Bob's Rumstyles at 6:45 AM 2 comments: