Grenada is full of surprises at every turn offering you something new to see and explore.   Just up the hill from River Antoine Distillery and Estate is the Belmont Estate.  This is a very famous chocolate factory produces chocolate that is sent around the world.   Coca is harvested on the estate then is fully processed through a process of fermentation, drying, polishing, sizing, and finally processed into chocolate,
﻿

Later we traveled over the mountains and visited Grand Etang Lake and Forest Reserve in the center of the island mountains.  This is another really interesting area with this volcanic crater that has formed a lake.   As part of the reserve there is another viewing area were Gibbon monkeys that were extremely friendly and ready to have you hand them some fruit.   These friendly creatures a really cool, but my experience with monkeys is they are best when kept at  just out of arms reach.
﻿ 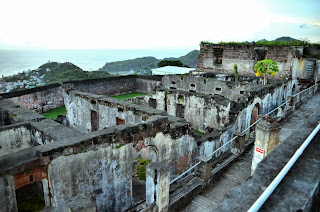 The sun is beginning to go down and it is time to head back down the mountain and back to the St. George area for our final stop of the day at Fort Matthews.   Built in the late 1700's, Fort Matthews was never used as a fortification, because the island had not been attacked until 1983 when it was mistakenly bombed by American forces during the 1983 invasion of Grenada.  The fort was being used as a place to keep the criminally insane at the time.   Today Fort Matthews is in a state of extreme disrepair, but it does have a unique little bar in the catacombs.  There are a number of catacombs that use to house troops and later the inmates of the insane asylum.
The bar is a quaint little place that was a wonderful place to chill at the end of this long, but fun filled day of exploring Grenada.   ;o) 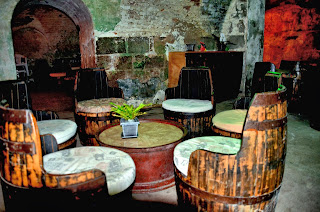 Posted by Bahama Bob's Rumstyles at 6:14 AM No comments: