Named for Gedney Clarke Esq. who bought up some 780 acres from the French, today known as the Woodland Estate around and including Court Bay in Grenada's southwest corner.  The name has been suggested as having come for the merging of the two names.   The factory is located in the Woodland Valley in the Parish of St. George.   Today the distillery is not open for tours as there is construction underway.  This factory has been operational since 1937 and is still largest and best known distillery in Grenada.  The distillery boasts steam engines that date back to the late 1800's used to power the factory up until the 70's or 80's. 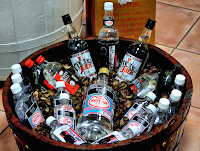 Today they manufacture a large line of rums that range from very basic white rums to the #37 aged and very sophisticated rum.  The whites come in a standard 80 proof and overproof versions, all with a very smooth and pleasing flavor profile. 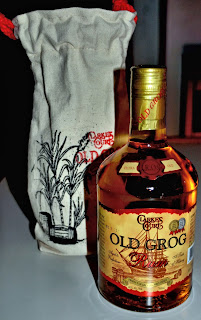 I found both the "Old Grog" and the "#37" examples to be very special.    The Old Grog, named the "King's Rums of his Majesty George III of England.  Casks of the King's rum were lab
eled "GROG, an acronym for "Georgius Rex Old Grenada".  Old Grog has a light golden color with a fruity nose.  The medium bodied fruity and almond notes carry into the palate.  The finish turns dry very rapidly and leaves you with peppery notes ant the end.

Clarke's Court  #37 Rum was introduced at Nick's Barrel House on the factory grounds by Leroy Nickles on April 16, 2010.  The rum's name is drawn from the year ( 1937) that the factory first opened to produce rums.    Mr. Neckles said “I want all of you to feel a sense of pride in this unique aspect of our heritage and to recommend #37; to friends, family and associates; as the ultimate experience in Grenadian rums”.    "Master Blender Ahmad Rasheed, gave a inspiring overview on the making of #37, but the evening was not without its lighter moments; as Mr. Devon Date, Production Manager of Clarke's Court, entertained patrons with his graphic demonstration of tasting techniques. Blend#37 did not disappoint and those present were high in praises of the rum; commenting" especially on its bouquet, taste and presentation.

Clark's Court #37 like Old Grog has a very tropical fruity and spicy aroma.  This leads right on to the palate where you pick up the flavors of the fruits and spices of the "Spice Island".  This is a medium bodied rum that subtly tickles your taste buds without overwhelming you mouth.  The smoothness of this rum carries on to the finish where there is a subtle fruitiness enhancing the slightly dry and lingering finish.

I am working on bringing this wonderful Old Grog and #37 rum to the Rum Bar in Key West, hopefully in time for the Holiday celebrations.   ;o)