There has been an announcement for the release of the newest of the Bacardi line of rums.  Bacardi Gran Reserva Maestro de Ron, a white sipping rum, that will be available in airports around the world.  This is a release that is aimed at the "Duty Free" market to give it a world wide launched around the world this summer.

I had the opportunity to taste this expression at the Bacardi Penthouse Party during the Miami Rum Festival last month and I feel like this is going to be a winner for Bacardi.   Although you have to travel out of the country in order to get your hands on a bottle of this rum, when you get the opportunity to visit an out of country airport liquor shop, pick up a bottle of this one.

Bacardi Gran Reserva Masetro de Ron was inspired by a recipe passed down through the generations of master blenders at Bacardi and uses  slow-filtering of the blended rum that has been aged up to three years.  The filtering is accomplished through the use of a coconut shell charcoal, creating an extremely smooth rum.    The rum has some fruity, floral and vanilla notes along with a nuttiness and some notes of oak as well.  The  taste is mellow, with slightly sweet notes.
Mike Birch, Bacardi Global Travel Retail, said: “The global super premium white spirits segment has grown strongly over the past decade and, backed by the unique quality and heritage of the Bacardi brand and its market-leading position in the category, we are seizing a clear opportunity to upgrade existing white spirits shoppers into the super-premium white rum segment." 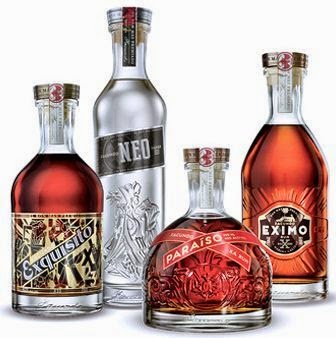 “We are confident that this stunning innovation with Bacardi Gran Reserva Maestro de Ron will set the pace globally for growth in the rum category and inject new levels of excitement among consumers that will ultimately lead to premiumisation of the rum category as a whole.”
This is a significant step for Bacardi into the realm of premium white rums, Bacardi Gran Reserva Masetro de Ron joins the Facundo Rum Neo launched last November as fine premium white sipping rums.  ;o)
Posted by Bahama Bob's Rumstyles at 7:00 AM 1 comment: