Hemingway and his Beloved Pilar

It is said that there is no greater friend than a man's boat, and Pilar was Ernest Hemingway's one true love to whom he was always true.     After returning from safari in Africa in 1934, Ernest Hemingway was headed to the Wheeler Shipyard in Brooklyn, New York to buy his 38 foot fishing boat.   Hemingway was as creative in boat design as he was as an author, putting innovations like the roller on the stearn and the "tuna tower" that were addid to the basic "playmate".   This is where the story of Hemingway and Pilar really begins.  Pilar would become Hemingway's very special place when things were at their best and at their worst.   The boat truly was his best friend and constant companion.   Something the people around him could not offer him like the time that he and Captain Fuentes spent on Pilar. 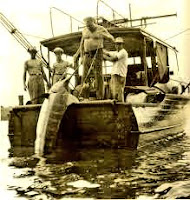 There was another side of Hemingway that wasn't seen on land.  This was Hemingway's place to act out all of his fantasies if you will.  He could be the gracious host, or the biggest boor, he could be a hero, just about anything he wanted to be.   According to Paul Hendrickson, author of "Hemingway's Boat", "If you learn everything that happened on that boat you'll get his entire life".


Pilar has had a rugged life as well,  she was found in 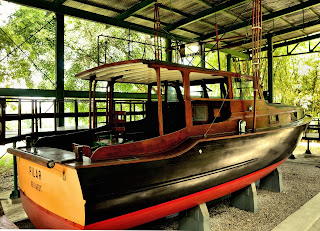 1965 in pretty rough condition and a restoration brought her back to life in 1965, but was left sitting until 1987 when she underwent more substantial repairs was placed in a garage at Finca la Vigia.    In the past decade, she has undergone a very thorough restoration and a relamination of the hull, as there were serious question about the stability of her structure.    Today she is in pretty fair condition for a 79 year old lady of the sea.   This little fishing boat has become a very special part of American Maritime History, and due to politics we are not able to help with the maintenance of this fabled piece of history.    Thanks to the Cuban Historic Trust, both Pilar and Finca la Vigia have been maintained and are open to guests.  There is a lot more that could be done, but that is in the hands of politicians and not "we the people", funny how that goes.

Here is the shot that I took of Pilar last year on the grounds of Finca la Vigia.   She is really looking quite fine, and it was a thrill to be able to walk around and shoot the pictures of her.

I can really agree with Hendrickson in that your boat is such an important part of a man's life.  My little dinghy that I travel around the islands and waters of the keys feels that way to me as well.  It really doesn't worry if I'm happy, sad, joyous or depressed, it is there and performs for me taking me on my next adventure and finds me new places and things to see and write about.   ;o)
Posted by Bahama Bob's Rumstyles at 9:10 AM No comments: