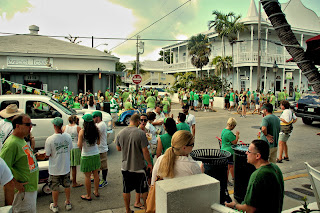 This past Saturday the St. Patrick's Day Bar Stroll in Key West brought out hundreds and hundreds of fun loving drinkers and partyers.     The streets of Key West were literally green as all of the strollers passed down Duval Street hitting bar after bar on their way to the Historic Seaport and Schooner's Wharf.     From the front porch of the Rum Bar, you could see the wave of green as it moved North on Duval Street coming from the Southernmost Resort where the stroll begins. 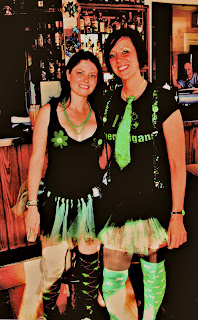 Though we were not a part of the stroll, the Rum Bar was loaded with revelers and very green with some really fun loving people.    The party was almost overwhelming in our tiny bar, but Anne and I were able to take care of the huge crowd.    We all still had a great fun afternoon interacting with everyone at the bar.    The best part was watching all of the fun the strollers were having as they paraded in and out of the bars on their way down Duval Street. 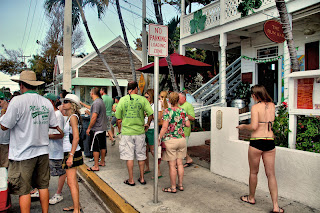 This is one of the most fun events of the year, because so many of the locals and tourists are involved in this event that virtually covers Old Town Key West for 6 or more hours.     Once it gets underway, about noon time, the streets and bars of Key West turn green and the zany people of Key West literally let it all hang out as the party up and down the city finishing at the harbor.

If you missed this years fun, you might want to put it on the calender for next year as you plan for one of the years really fun days.    It was a great one this year and as usual I'm looking forward to next year's already.   ;o)
Posted by Bahama Bob's Rumstyles at 8:23 AM No comments: