1 Barrel Rum: Quite the Surprise

1 Barrel representative Amanda Perdomo walked into the Rum Bar yesterday morning and dropped off a little bottle of 1 Barrel Rum to us for sampling.    We found it to be surprisingly good.    Made in Belize by Travelers Liquors.     This family owned distillery was founded in 1954.    1 Barrel was first blended in 1964 by Master Blender Don Omario Perdomo, and has been since perfected by his sons Romel and Mayito into this fabulous rum that is available today.

The Rum is produced from a high grade molasses that is fermented and then double distilled at the Belmopan, Belize distillery.   The rum is aged for at least 2 years in Kentucky Bourbon Oak Barrels.    The final blending give the rum it's sweet taste with notes of butterscotch, maple, and caramel.

I found the rum to have an attractive aroma that lead me to taste the rum.    The flavor on the palate and the long and smooth finish left me with a very nice warm feeling about the entire experience. 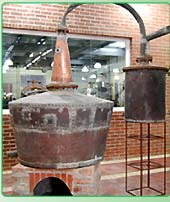 The name of the distillery, Travelers comes from the bar that Jaime Omario Perdomo opened in 1953.    The name of the bar was appropriate because his customers were usually traveling to or from Belize City.    Omario sold imported liquors and beers as well as some locally distilled rums.    It was the practice of many bars of that day to blend their own rums  exclusively for their bar.   Perdomo followed in the tradition of the many other bars, leading to the development of 1 Barrel and the decision to open his own distillery so the blends consistency could be maintained.

I think you like myself will be pleasantly surprised with the great taste and the quality of Don Omario Perdomo's fine rum.     ;o)
Posted by Bahama Bob's Rumstyles at 8:22 AM 2 comments: