Birds by the Thousands Transported by Hurricane Hermine 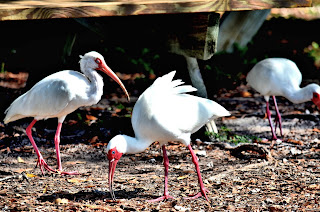 One of the outcomes of a hurricane that is not often considered is how large numbers of birds can
get caught up in the storm and get carried for many miles in the eye of the storm.   You hear about the damage the storm surge, flooding rains and the winds do, but this is the first time I've heard about the birds.   One of the reasons they survive is they are pretty savvy about these storms and have learned to use their currents to get to the eye where it is calm.

Hurricane Hermine transported potentially thousands of birds from the Gulf of Mexico into the Southeast. We know this because the National Weather Service’s radar clearly shows signatures trapped inside the rain-free eye that we know represent winged creatures.   This is similar to the event during Hurricane Arthur in 2014 carrying many birds along the East Coast with the storm.   The birds get into the end of the hurricane’s spiral and they move with the wind currents toward the eye of the hurricane.    They may not necessarily do it in any organized way, they’re out there in all the wind and chance into the calm of the eye where they stay and travel with the eye rather than fighting the winds again.     When the storm reaches land, some of them may start fighting the winds. Others may go with it and travel with the eye until the hurricane dissipates. The majority of seabirds, if they are not too weakened from having flown for so long without food, will probably find their way back to shore quickly.

I found this to be very interesting and there is more to the story if you want to read more about it at https://www.washingtonpost.com/news/capital-weather-gang/wp/2016/09/02/thousands-of-birds-got-trapped-in-hurricane-hermines-eye-really/