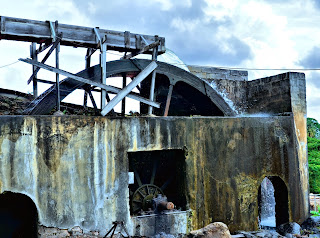 While in Grenada last week, I did have a chance to travel northwest to St. Patrick's Parish and visit the River Antoine Distillery, a step back in time to watch a factory that is still operation as it did in the late 1700's.  This 228 year old Rum Factory is like no other that you have ever visited. The power for the operation come down from Lake Antoine via the River Antoine and an aquaduct to the C. Fletcher and Company of London and Derey water wheel at the Factory.   The wheel provides all of the power for the cane press and the conveyor system that brings the cane up to the pressing unit.   The system is as reliable as the flow of the water.

The press is another of the very old pieces of equipment still in operation at the factory.  It is driven by the water wheel through a series of gears and chains that turn the harvested sugar cane into juice.  The spent cane hulls are then hand lifted into small rail cars and pushed over to the dumping area and allowed to dry in the warm tropical sun.  Later the hulls also known as "bagasse" are used for the most part as fuel to boil the cane juice and fire the still, but some is also used as fertilizer for the crops on the estate.

After the cane is pressed, the juice flows by gravity to the copper boiling cauldrons where the syrup is thickened and concentrated.  This is a process that is accomplished first by gravity then is hand ladled from the coolest cauldrons to the hottest one.  The syrup is then pumped on to the fermenting tanks in the next room.

Fermentation in the tanks of cane syrup / molasses picks up natural yeasts from the air and fermentation begins.  It takes fro 8 to 10 days, depending on the weather at the time for the fermentation to bring the alcohol content up to 13 to 15 percent. 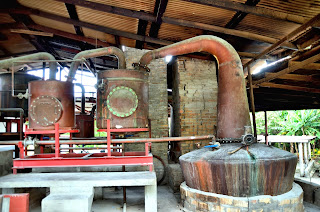 The  wash is then pumped into one of the wood and bagasse fired "Ventdome Potstills" where the rum is distilled until it reaches the ABV (Alcohol by Volume Percentage)  desired.  The rum is tested in a hygrometer, if the ABV is at the desired level then it is pass to bottling and the process is concluded.  If not, then it is pumped back into the still for further distilling. until desired ABV is reached.

There was some Coca production being done in days gone by on the estate when the cane was not available for making rum.  You can still see some of the drying tray rails along side of the tasting room. 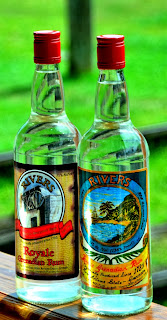 River Antoine Distillery is a year round operation, but it is the favorite rum of the region of Grenada in which they operate, and they sell 100% or their product locally as well as to the visiting tourists.   I bought the T Shirt, that says "Don't Say Rum, Say Rivers".   There is an extreme loyalty that the "Rivers" drinkers have for their rum and it can be seen in the rum shops and taverns around the north region of Grenada.

If given the opportunity to visit this wonderful "old school" distillery, do pass it up, take a taxi, a bus or a car, but make it up and see how rum was made in the 1700's.  There are daily tours and tastings at the distillery and estate.


Posted by Bahama Bob's Rumstyles at 9:20 AM No comments: