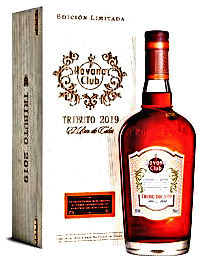 Pernod Ricard-owned Havana Club has unveiled its 2019 Tributo bottling, a blend that includes rum aged in Cognac casks.  Tributo 2019 was created by three generations of maestros del ron Cubano – masters of Cuban rum – including don José Navarro, primer maestro del ron Cubano; Asbel Morales, maestro del ron Cubano; and Salomé Aleman, the first and only female maestra del ron Cubano.
Each master selected a rare and extra-aged rum base that was deemed representative of their individual styles, which were first left to mature in the 1970s, 1990s and 2010s.  These rum bases were blended with a rum that has been matured for more than 25 years in French oak barrels.  A total of 2,500 bottles of Havana Club Tributo 2019 have been created at 40% ABV.
The rum will be available in more than 20 markets from March, priced at a suggested price of $455 per 700ml bottle.  Tributo 2019 is said to have notes of oak and dried fruits on the nose, with flavors of vanilla, dried fruits and toasted almonds on the palate.  Morales said: “Once again, the Havana Club Tributo collection praises the richness and variety of styles that form the base of the authentic Cuban rum category.
“Each rum in the Tributo range uniquely focuses on a different element of the production process, from our ancient rum bases to cask experimentation and the 2019 edition continues this story by honoring the craftsmanship of three of the maestros del ron Cubano.”  The 2018  Havana Club Tributo edition was a rum finished in smoky whisky casks.  Pernod Ricard first launched the annual limited edition Havana Club Tributo Collection in 2016.


Posted by Bahama Bob's Rumstyles at 5:35 AM No comments: