Day One in Havana, Cuba 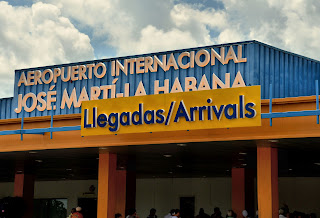 The first thing that hits you as you arrive at Jose Marti Aero Puerto is that you have stepped back into the 50’s.   The ramp you walk down to deplane, the buildings of the terminal.    The first sign of modern technology is when you check in to Cuba at customs.  The have high tech computers and cameras.   After the check in process is completed, the next thing as you walk out of the terminal and greet the parking lot filled with 50’s era automobiles.    On closer inspection, the fact that these relics are still around in this salty corrosive environment is unbelievable.   Many of these are a hybrid of different models and makes fitted together to keep them moving.   Chevys with Pontiacs and Buicks; Plymouths and Dodges;  They make for a very interesting group of autos.  Most of them are in pretty good shape for their ages and the fact that they have been operated in the salty tropical area. 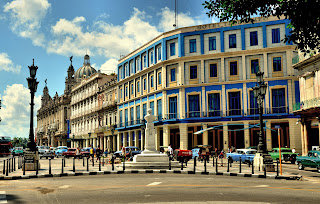 Next we arrive at the Telegrafo Hotel which we will call home for the 5 days we are in town.   The hotels has a really great bar and restaurant.  The cocktails are all made with real Cuban Rums like Havana Club and Santiago de Cuba (made in the original Bacardi Distillery), and hall in the traditional Cuban style.

﻿
Off we go into the streets; first stop is in front of the Old Bacardi Building, one of the most beautiful buildings in Old Havana.     From there we look to the right and right in front of us is El Floridita.    Inside and straight for the bar and have a Papa Dobles and a seat next to Hemingway enjoying the cocktail and take a picture to look back on the whole experience later. The daiquiris were to die for, but the atmosphere of the décor and the music makes me feel like Ernest would walk in at any time.    By the way, he is standing in the corner, ready to pose for your pictures.

﻿﻿﻿﻿﻿﻿﻿﻿﻿﻿﻿﻿﻿﻿﻿
Next it was off to the Ambros Mundo Hotel, where Hemingway lived until he bought his house, “Finca La Vigia” built in 1886 by Miguel Pascual y Baguar, a Spanish Architect, and Hemingway bought in 1940 for $40,000.    The hotel was the perfect location, just a few blocks from El Floridita, Bacardi Building, La Bodeguita del Medio, and so many other places. 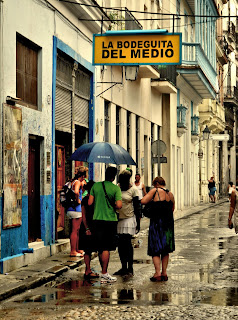 Now it is off to La Bodeguita del Medio for a Mojito.    This is another place that is in a narrow alley of cobble stones and old architecture.   Great vibe in the place and it is standing room only as you get push into a square foot or so to order your mojito.    This is a bodega by US standards, but the narrow alley and the small entrance make this a must see, you must push your way to the bar to have one of their Mojitos.  The food is really good too, by the way. 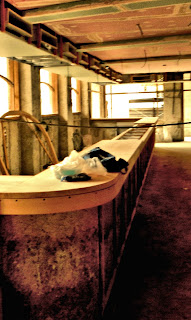 The other exciting bar in Havana that I would have liked to had a drink at was Sloppy Joe's, but it is being reconditioned, but we were able to get inside and see the reconstruction of the famous long bar.     The original bar is at the Havana Club Museum where you can get a cocktail served on  it when you go through the museum. 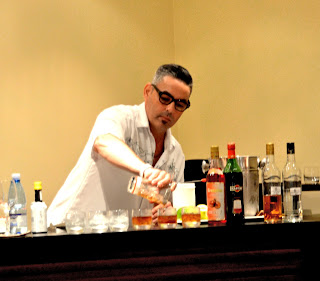 This was just the first day of the five days that Julio is so ably guiding us through the streets and the back alleys of Old Havana.    The part that amazes me is how you can turn any corner and there is something there that catches your eye.     The other thing that was a real surprise is hearing the rest of the story if you will from the people who live here and the pride in their country.
Posted by Bahama Bob's Rumstyles at 10:18 AM No comments: