Yesterday was one of the banner days in rum diplomacy here in Key West.    Rob Burr, Mike Streeter, and myself all together at the Hurricane Hole to talk about and drink a little bit of rum.        The summit meeting lasted until the wee hours of the evening and much I think was accomplished.     I remember talking about rum stuff and the up and coming Miami Rum Renaissance Festival, and the possibility of a new event here in Key West, and the further development of the Rum Cruise in November, but after that the rest became a bit fuzzy. 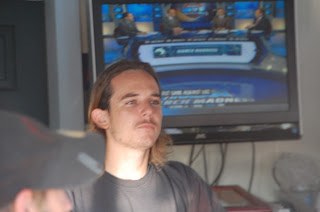 The Hurricane Hole is an appropriate venue for such a summit meeting, because of the beautiful waterfront setting of the bar and restaurant.     The bright and sunny evening sky's make a perfect setting to discuss rum and rum promotion.     Paul our soon to be "Papa" and bartender made sure that our glasses were kept full as the meetings were reaching their critical levels. 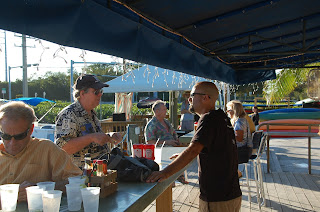 As the sun set on the Hurricane Hole and negotiations started to ebb, we piled back into the dinghy and moved the proceedings back to my boat where we took up with some old business, Plantation Guyana, El Dorado 15 Year, some assorted Abuelo's, and small spot of cinnamon apple spirit.       It was during the old business part of the meetings where things started to become a bit fuzzy.     I think that we just said enough of the old business and we all nodded off.     Upon waking this morning it was noted that all was still in one piece everyone had all their stuff.     I guess that I have to call this a rumstylin Key West Summit and something that needs to occur more often to keep the rums of this world fresh in our minds and the economy of the rum world moving ahead.    ;o)
Posted by Bahama Bob's Rumstyles at 9:34 AM 1 comment: