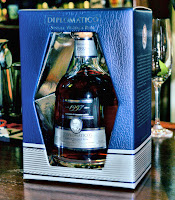 The visit to the DUSA Distillery today was very much over shadowed by the introduction of the very limited production (2000 Bottles) new rum for distribution only in Venezuela and Venezuela Duty Free shops.      Diplomatico is premiering Diplomatico Single Vintage 1997 on 28 November, 2012.

This is a rum that will have a price point between the Diplomatico Reserva Exclusiva and the Diplomatico Ambassador.   This is an extremely fine premium rum that is aged in oak and finished in Sherry casks.  It is a single vintage from 1997 rums that Tito Cordero has blended perfectly to be produce this very special rum.    The real unfortunate part is that it will only be sold in Venezuela.     The aroma is fresh with notes of wood and sweet fruitiness that yields some notes of the sherry.   The flavor of is viscous rum is warm and long lasting and a dryness in the finish that is so satisfying. 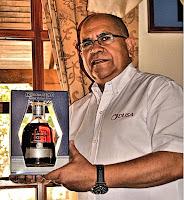 These past three days with Diplomatico's people including Humberto Arispe Zubillaga, General Manager; Tito Cordero, Master Blender; Alfonso Castillo Gonzalez, Marketing; and the rest of the wonderful people at DUSA who have made our stay in Venezuela so very special.  Today's unveiling of the Diplomatico Single Vintage 1997 for us was the climax of the three days we spent as Diplomatico's guests.   If you should for any reason be in Venezuela, stop by the Duty Free Shop in Caracas Airport and pick up a bottle of this superb rum and if you think of it pick one up for me.  I do reimburse.  ;o)
Posted by Bahama Bob's Rumstyles at 8:19 PM 18 comments: 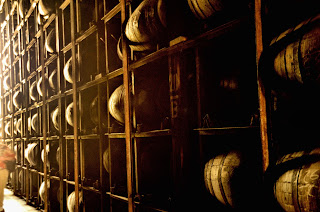 As we arrive at the gate we are greeted by Tito Cordero master blender of Diplomatico and the genius behind the new Ambassador Rum that is soon to be seen in Florida.   With 265,000 barrels of rum resting in 21 bodegas,this is one of the most impressive of the aging facilities that I have ever seen.   The bodegas are also very  full and there is very special equipment that is used to move the barrels in and out of the bodega.     The barrels are stacked 8 high and 23 deep on each side.   The bodega we were in contained some 23,000 barrels of rum that was resting.   When the rum was to be taken out it is taken out by rows of barrels (22 to 23 at a time) and taken to the blending area.

Under the DUSA program the barrel are used for approximately 6 cycles or about 24 or so years before they become firewood.    The distillery has a complete cooperage to repair and assemble the barrels for resting  the rum before blending and bottling of the rums. 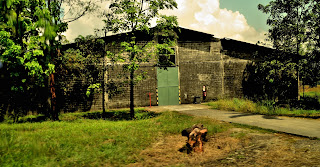 DUSA Diplomatico's corporate name employs 630 local people in the operation, and there is a tremendous loyalty to the company.   DUSA has it's own fire department, ambulance service, and healthcare center at the facility.   DUSA is by far the largest employer in the region and is very proud of their facility and the relationship with their employees. 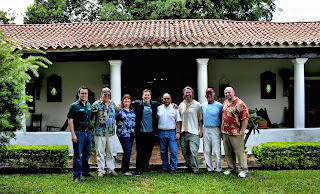 Lunch time and a short trip over to the Hacienda and a fine box cooked port lunch.    Our host Tito Cordero leads us around the Hacienda with all of the beautiful gardens and interior.   This is a true rural ranch that has Brahma Buffalo herds and many other types of stock as well as the beautiful house.   We were treated to some fabulous mojitos as well as the Diplomatico Reserva Exclusiva and after lunch a glass of Hacienda Sarino, a fine rum aperitif perfect for finishing a fine meal.

With lunch behind us it was back to the hotel and getting ready to judge the Diplomatico World Cocktail Tournament regional event at the Hotel Jirahara's Tantra Bar.   This was the first regional event in the series that will lead to the 2012 champion barman.    The barmen were given 5 minutes to prepare and then 5 minutes to make the cocktails in front of the judges.   The judging was in three areas; the first is based on neatness, precision, uniformity of the filling of the glasses, simplicity, salutation, courtesy,and manners.  The second is based on garnish, preparation, color, and general appearance.  The final area is aroma, taste, and balance of the cocktail.    There were 17 barmen that entered the event and they were all very impressive.   The sad part of any contest is that there is only one winner.

This has been a really great day that ended with our hosts and a very fine dinner.   Today is another day at the distillery and another visit with Tito Cordero on the subject of the blending and the distilling portions of the process.
Posted by Bahama Bob's Rumstyles at 6:53 AM No comments: