Ian's Alley Rum is very interesting small batch craft rum made in the mountains of Colorado.     Mancos Valley Distillery is the dream come true of Ian James, who spent two decades as a commercial brewer in Durango and Cortex, Colorado.   Economics and the real world facts of too many craft breweries in the area pushed him toward building the distillery.   Hidden in the back alley, Ian's homemade still produces a very nice white rum.   The still is located in the back room of the bar that serves many fine "boat drinks", made from his craft rums made in the back room.   The bar also has live entertainment  on a regular basis. 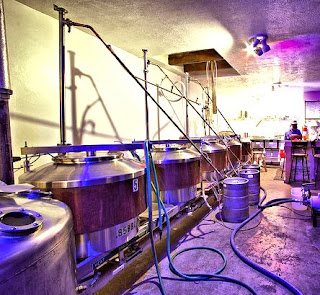 The rum is made from evaporated cane juice and pure Rocky Mountain snow melt.  The mash is fermented on site in an manner that combines the old world with modern technology to make this very interesting rum.     The process is carried out by Ian.  From the cane to the bottling of this rum takes about two weeks.   It is processed in five copper clad pots that were made from pieces and parts he had collected over the years as a brewer.   The "cane wine" is double distilled in pot stills and then past through a third polishing still before bringing it down to 80 proof and bottling.  The initial 75 gallons of mash yields about seven cases of Ian's Alley Rum.  The process was worked out by Ian in a "trial and error" method, but the results are worth the efforts. 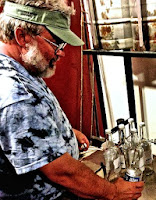 This is the product of a small town, it also is a very nice and smooth white rum that I find very refreshing in this era of sugared and flavoring to hide the low quality of many distillates out there on the market.   Ian's Alley Rum has a very distinct flavor with hints of an agricole influence, made from evaporated sugar cane juice, instead of molasses, yielding a flavor that is sweet and still pretty neutral.  The finish is clean and has virtually no burn.   Ian's Alley Rum is a great rum for mixing, and is also available as a spiced rum.   There is also a coffee liqueur that is made there as well.


Pretty impressive products from this 7,000 foot high town in the Mancos Valley of Colorado.   I'm not going to say it, but this is truly a "Rocky Mountain High".  ;o)
Posted by Bahama Bob's Rumstyles at 8:11 AM No comments: