It is good to see that I am not the only one that is a bit miffed about the "pork barrel" antics that took place in Washington D.C. under the guise of the "Fiscal Cliff". 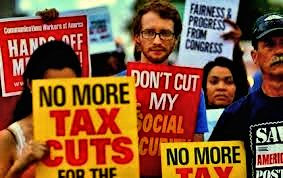 
Global Outlook All that fiscal cliff business had investors reaching for the drinks cabinet over the new year. But when the bill was passed, one British corporate giant had more reason to celebrate than most. For, believe it or not, thanks to the weird world of United States lobbying, the Smirnoff-to-Guinness giant Diageo emerged as one of the biggest beneficiaries.


While we naive observers in the rest of the globe thought the legislation was all about saving the US from economic collapse, in fact, for a small but powerful Washington lobbying elite, it was more about driving through a few jumbo-sized special-interest-group tax breaks.


The rest of the world, and US taxpayers, focused on the deep public spending cuts and tax rises for the wealthy presaged by the bill, but President Barack Obama shoehorned in a host of completely unrelated "pork barrel" tax breaks for big business.


One of them was a two-year extension to the tax break mainly benefiting Diageo's Captain Morgan rum distillery in the US Virgin Islands.


The deal will mean Diageo saves many millions more dollars in rebates, which rivals argue makes it hard for the company ever to lose money on the liquor.


It's impossible to state exactly how much Diageo will save as the break is based on how much rum the company manages to shift from its shiny new distillery in the US territory. Some reports have put the annual benefit at around $50m (£31m).


You could argue that's not much for a multi-billion dollar operation like Diageo, but it's a whole lot more than the company paid the Washington lobbyists Trent Lott and John Breaux to push for the change. Data obtainable through the OpenSecrets.org website suggest Diageo paid the pair's firm only $120,000 last year.


Perhaps the duo, a former Republican and Democrat senator, should up their rates. They may need to, since another client, the Lance Armstrong Foundation, may not be paying its $100,000-$250,000 annual lobbying dues for much longer.


As a Brit, whose pension is, I presume, partly invested in the world's biggest drinks company, it's hard not to have mixed feelings. On the one hand, you have to admire Diageo for its political nous in hiring two of the most effective lobbyists in Washington to do its bidding so well. The way the White House jingoistically abused BP after the Deepwater Horizon disaster highlighted how British firms don't always play the game with such elan.


But this kind of lobbying in foreign climes is reputationally risky. As the US media focused on the Armageddon Averted fiscal cliff story, the tale of Diageo's nice little earner didn't cause much of a stink. But think about it: "hard-pressed American taxpayers bail out Limey booze peddlers," could have played pretty big in other circumstances.


Incidentally, Diageo, which did not comment on my queries about this story, managed to get tax incentives worth some $2.7bn when it moved its Captain Morgan distillery from impoverished Puerto Rico to the US Virgin Islands.
Read More at http://www.independent.co.uk/news/business/comment/jim-armitage-lobbyists-help-smooth-the-way-for-diageos-jumbosized-tax-breaks-8448830.html
I just could not let this article pass in all good conscience.    Enough of my "soap box" orations and back to the issue at hand, good rum.   ;o)
Posted by Bahama Bob's Rumstyles at 9:51 AM No comments: