A friend of mine set me a note the other day asking if I had ever heard of "Santa Cruz Rum"?  That is all I needed to start investigating.   It seems that it first made appearances in the mid 1800's.   It was produced by the Hermon Hill Distillery in Christiansted, and eventually became part of the Suntory Beam Corporation and Cruzan Rums today. 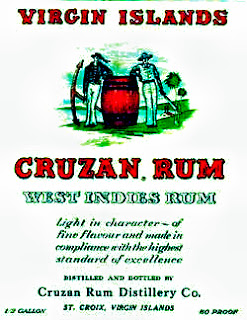 Although some of the investors of The Diamond Rum Company were also investors in Santa Cruz Distillers, the two distilleries were marketed under separate labels, respectively, Cruzan Rum, and, Santa Cruz Rum. Early documents give evidence to the importance that was placed on advertising Cruzan Rum as a unique brand name from its earliest days.  In 1936, there was a  Copyright Registration  of the distinctive Cruzan Rum label (“Design consisting of barrel with two men against background of tropical scenery”)  issued to St. Croix Sugar Cane Industries Sales Corp of Portland, Oregon.

The question came up because he saw Santa Cruz Rum  in some old Civil War era cocktails.
Below are a couple of those cocktails from that era.

Fill glass 1/3 full of shaved ice. Shake thoroughly, strain into a large cocktail glass, and fill up with Club Soda or  Seltzer Water.


(Cool with shaved ice; shake up well, and ornament with berries in season. If this is not sweet enough, put in a little more raspberry syrup.

It is amazing to me how we can dig up old recipes and find they have direct connections to modern day rum production.  ;o)