Here is an idea for a great summer evening cooler that is really creamy and flavorful.  Give this one a try, you're going to love it. 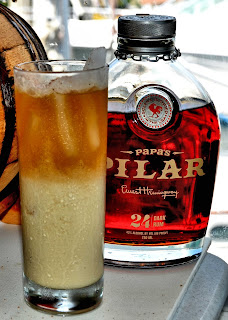 Combine Place all ingredients except the rum into a cocktail shaker filled with ice. Shake until chilled and Strain into a Collins glass filled with fresh ice. Float the rum on top Garnish with fresh ground nutmeg and an orange zest.


Place a saucepan over high heat, combine water, sugar, and cinnamon sticks.  Stir continuously until sugar is dissolved and mixture comes to a boil.  Reduce heat to a slow boil and stir for another 5 minutes until syrup thickens.

Remove pan from heat and stir in vanilla. After cooling, strain the syrup to a clean dispenser.  Store in the refrigerator for up to one month.
Posted by Bahama Bob's Rumstyles at 5:58 AM No comments: