Old Havana is one of the more beautiful cities that I have seen.   It's majestic buildings, and the time warp to 1959, is something you won't ever understand unless you visit her.   You just can not appreciate the beauty and all of the really great historic places without walking the streets of Old Havana.   There are just so many places that you must see to appreciate, more than my 5 days would allow.    I'm not just talking about the bars that I have already covered, but the historic landmarks that define the city.    There are museums of all types throughout the city. There are fireman's museums, revolution museums, rum museums, and that is just the tip of the iceberg.

The museum of the revolution, the former Presidential Palace,  houses statues of Che Guevara and Camilo Cienfuegos along with their guns and caps.  The Presidential Palace has Neo-Classical elements and was designed Cuban architect Carlos Maruri and Belgian architect Paul Belau.  The was  decorated by Tiffany and Company of New York.   Completed in 1926 and remained the Presidential Palace until 1959.   There are also displays of Batista's Gold phone and many other items that relate to both the revolution from Spain and the Revolutionary War of the 1950's.  In the annex behind the museum is "Granma" the boat that was used to transport Fidel Castro and 81 fighters of the Cuban Revolution from Mexico to overthrow Fulgencio Batista in 1956. 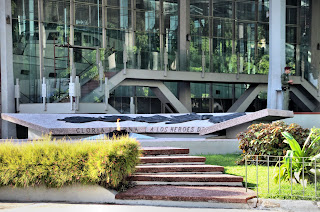 There is also an eternal flame as a memorial to the fallen soldiers of the revolution at the annex.   You will also find a Hawker Sea Fury, an SU 100 Tank, a The engine from a Lockheed U-2 Spy plane shot down during the Cuban Missile Crisis and many other very interesting relics from the military.

﻿﻿﻿﻿﻿﻿      Other points of interest around Old Havana include the National Museum of the Arts, The Grand Theater of Havana, Revolution Park (Central Park).   All around Central Park are some of the finest hotels in the city.  Hotel Telagrafo; the one we stayed in, Hotel NH Parque Central; one of the most beautiful ones with it's grand stair case coming down into the lobby, Hotel Inglaterra; boasting some of the most fabulous painted murals and ceramic tiles throughout. 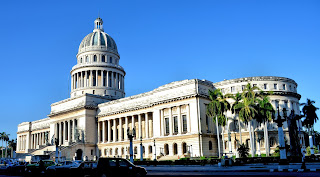 El Capitolio, the was inaugurated on May 20,1929.     After a referendum of it was named "El Capitolio"and became the home of the Cuban Legislature.   This is another of the "Neo-Classical" buildings the Cuban government favored at the time.     The building is currently closed to the public, and is being "restored", but there are no real signs of work being done on the vacant building.

El Capitolio
There is a view of the Havana skyline from the roof of the Hotel Inglaterra the includes the Grand Theater and El Capitolio.   It is not a bad place to sit and enjoy a fine daiquiri as well.    All in all this is a most beautiful city, one that many of the buildings are in need of repair, but her historic splendor is still very much in tact and the first thing that gets your attention when you wander through her streets.   ;o)

Posted by Bahama Bob's Rumstyles at 2:19 PM No comments: