Myths and Truths about Alcohol Consumption 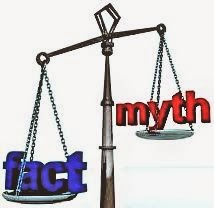 I ran across this interesting article about the myths on drinking alcohol and thought that you might enjoy reading it also.  There are so many different myths that are out there these days, I am glad that some one put them together and talked about them.


You may drink, and you may party, but do you get My Drunk Kitchen wasted?


Here are the 8 biggest alcohol-related myths, and why they are false.


1.   Liquor before beer never fear, beer before liquor never sicker. There's no magical order of drinking that will save you from a hangover the next day. The order you drink certain types of alcohol in doesn't matter - even switching between beer, wine, and liquor throughout the night won't make a difference. Bottom line: all that matters is how much you drink, not if you saved the beer for last.


2.   Breaking the seal means you'll have to pee more all night. Alcohol is a diuretic, so it's already going to make you pee a lot. "Breaking the seal" the first time will not increase the amount of times you have to go to the bathroom, but drinking lots of alcohol will.


3.   Blackouts can eventually be remembered. If you wake up fuzzy on the details from the night before, you probably shouldn't even bother trying to remember: it's impossible. When we drink too much the part of our brain that encodes memories actually switches off. People claiming they remember what happened after they blacked out are probably having what are called false memories.


5.   Mixing energy drinks with alcohol makes you drunker. Turns out it just energizes you. The problem is the extra shot of energy can make you feel less intoxicated than you actually are.


6.   Tequila makes you crazy. There is no evidence that a type of alcohol gets you a certain type of drunk. So anyone claiming that wine makes them sad, or whiskey makes them angry, doesn't have much scientific evidence backing them up. The number of drinks and speed of drinking have the biggest impact on your drunk mood.


8.   A night cap helps you sleep. A drink before bed will help you fall asleep faster, but your body will actually spend less time in REM, and the quality of your sleep will suffer.


Check out 21 more alcohol misconceptions in the video below and you can read more @
http://www.businessinsider.com/29-common-misconceptions-about-alcohol-2014-2#ixzz2sd2sClmG
Go online and check out the rest of the story and video, I think you will find it amusing as well as enlightening.   ;o)
Posted by Bahama Bob's Rumstyles at 7:35 AM 1 comment: