Bacardi has launched "Oakheart" their new spiced rum.     Like good rum pirates Bacardi is out to take the spiced rum market in a siege.     They have launched an all out attack on the category of spiced rum.   This is truly a quality rum that has been enhanced with quality spices like maple, cinnamon, honey, and a variety of others that work very well together.

This is a very smokey rum with accents of honey, fruits and even some vanilla, that is a very complex flavor profile that is not unlike that of a fine bourbon.     This has a smoothness missing in many of the members of the spiced rum category.    Many of the others have chosen a mediocre rum and tried to hide it with the spice package, not so with  this new addition to the market. 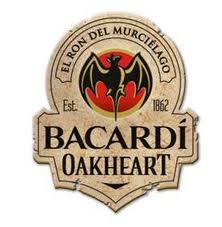 Bacardi is looking to improve it's image in the marketplace and with the addition of this new spice rum and some other rum that are said to be in the halls and soon to be released, Bacardi could be right back at the top of the group for quality rums.

I'll have Bacardi Oakheart at the Rum Bar in Key West on Wednesday afternoon for your enjoyment, so just drop on by and see what Bacardi has done to the Spiced Rum Category.   ;o)
Posted by Bahama Bob's Rumstyles at 8:12 AM No comments: