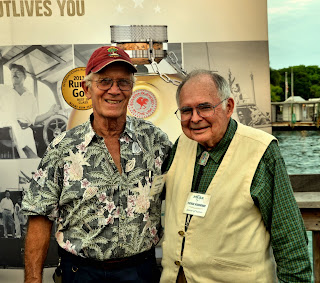 It was one of the honors of my life to have been able to meet Patrick Hemingway, middle son of Ernest Hemingway here in Key West last Friday night.   Talking with him and enjoying some of the stories of Cuba and the memories of his father were just heart warming.  He is now in his eighty's and a memory as sharp as though everything had happened just yesterday.

He related some of the stories of summers in Cuba at Finca Vigia, the Hemingway home in San Francisco de Paula outside of Havana.   He told of his first camera a Rolliflex he received from his father that he was given to his father when he went to China with his third wife Martha Gellhorn, who was on assignment for Collier's Magazine.

﻿      Patrick was born June 28, 1928 in Kansas City, Missouri, but traveled to Europe, Wyoming and Idaho during his childhood, though his permanent residence was Key West, Florida.   After his parents divorced, he would visit his father at Finca Vigia in Cuba quite often.  The start of World War II found Patrick accompanying his father on improvised attack missions in the Gulf of Mexico on his father's boat Pilar.

Patrick Spent 25 years in Africa as a safari guide and teacher at the College of Wildlife Management in Tanzania.

Patrick edited his father's last book about Africa and published it in 1999.  The book was one of fact and fiction from an East African expedition Ernest and Martha went on during 1953 -54.   Toward the end of the trip Ernest was in two successive plane crashes in which he was reported dead.  Ernest was said to have read about his death in the newspaper when he wandered out of the jungle.    Patrick took the 800 pages of the unfinished manuscript and edited it down to about half the size and published "True at First Light".   Patrick was more than qualified to do the final editing for he had been present through most of the safari. 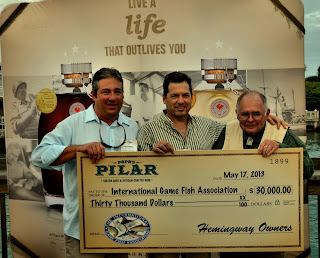 Today Patrick lives in Bozeman, Montana, where he has been his residence since 1975.  There he oversees the Ernest Hemingway Intellectual Properties and the Hemingway Foundation.

Papa's Pilar Rum is the latest of the projects he has been involved in and seems to thrive on the active life he still leads. ;o)

Posted by Bahama Bob's Rumstyles at 9:11 AM No comments: