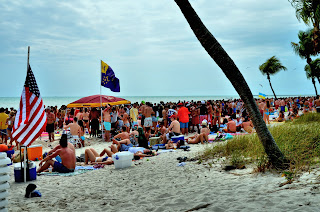 I took a walk on Smathers Beach yesterday to see how the spring breakers were doing.   I could hardly find a place to place my feet as I walked along the water's edge.   This is the most crowded that I have ever seen the beach.    It is clear that the beach is the place where the breakers are this year.   The tight economy is even effecting the way the young people are spending their spring break this year.   I have noticed that very few are down on Duval Street in the bars this year.   They seem happy  to be having their party on the beach.

There aren't the masses of motor scooters with their horns blowing down Duval Street like in the past years.   This year they are getting to the beach and letting the party rip.    It is all about suntans, volleyball, and tossing a football this year.   This week the weather is co-operating with the party throng, temperatures in the mid to upper 70's and blue skies.    This is the perfect place for fun, and they seem to be following the Key West way of having fun without stepping on other's toes in the process.   This is a great group, they really know how to have fun. 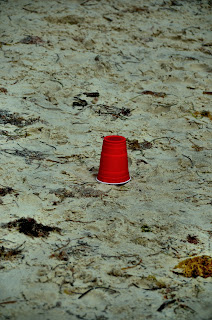 I see this week as a fun week that is truly reflecting the effects of the economy this year.   It is fun on a budget and still the emphasis is on the fun.   It is like the song says a "Red Solo Cup" beach party.   Like all of us when the budget effects the party we just make some adjustments and party on.

Next week is another party, though a traditionally smaller group than the first two weeks, but none the less a party for those released from the books for a week.  Let's see what it brings.  ;o)
Posted by Bahama Bob's Rumstyles at 8:05 AM No comments: