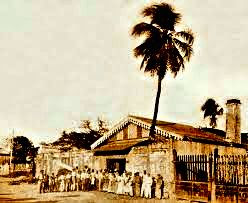 Everybody knows about the bat that is the primary logo of the Bacardi company, but do you know the story of El Coco that was planted by Don Facundo Bacardí Massó's son?

A fascinating Bacardi symbol: El Coco, a coconut palm planted prominently at the opening of the distillery by the founder’s 14 year old son, Facundo, Jr.   As its roots took hold so did a popular legend: "... the Bacardi company will survive in Cuba so long as the coconut palm lives ..." 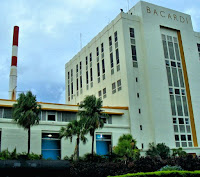 Today there are palm trees planted in front of the Bacardi Cathedral of Rum in Puerto Rico as well keeping the belief alive.   It has been said that the planting of El Coco and the purchase of the Nune's Marina Baja Street distillery mark the beginning of the Bacardi Rum Company. 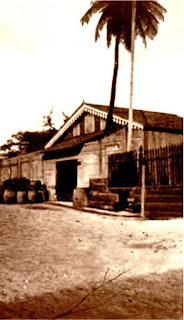 Call it a liquor legend. As revolution engulfed Cuba at the end of the 1950s, the coconut tree that Facundo Bacardi had planted at his distillery in Santiago de Cuba in 1862, as a symbol of company prosperity, began to wither and die. Months later, Fidel Castro would seize the property and the Bacardi family would flee the island.
It seems so fitting that the tree seemed to know when the end was near for the Bacardi Rum Company in Cuba, and would whither and die just as the Bacardi family fled Cuba in the late 50's.