The Dark and Stormy: Corporate Trademark, or Cocktail 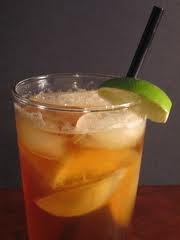 One of the more refreshing drinks in the tropical menu is a "Dark and Stormy, but Gosling's pursuit of absolute control of the cocktail and it's ingredients has taken much of the luster off this fine drink.

Let's start by looking at the history of the "Dark and Stormy".     As the story goes, the Gosling Brothers made a dark bitter rum that the Royal Navy in the 1860's bought for its sailors.     At the same time the Royal Navy had access to a "Ginger Beer" ( Containing up to 11% alcohol at the time) that was produced by Mead & Metheglin in England.      It has been said that a sailor had poured some dark navy rum into a glass containing ginger beer and "whala", he was quoted as saying, "there isn't a sailor that would sail under that dark cloud".     With that story in mind and the fact that the rum was more than likely a Gosling dark rum, the rest of the story unfolds.

It seems that because Gosling has trademarked the "Dark and Stormy", a bar that doesn't make the drink to their recipe can be sued.     I can understand the principle, but sometimes you have to choose your battles if you really feel that you product is not as good as someone else's, then improve your product and don't stifle the creativeness of the bartenders that choose to sell your product or not.     In 2009 Zaya ran an ad that recommended the use of their rum in a "Dark and Stormy" to which Gosling using their two U.S. Patents and Trademarks as ammo made threats that were stated as"they we are going to persue compensation from Zaya rum for the ad that was placed in Imbibe".     It is not known if it went any farther than threats, but this is not a good public realations move in such a competitive game.    The sad part of all this is it really in't necessary because Gosling's is the only rum that has that taste to make a really proper "Dark and Stormy".

The "Dark and Stormy" is a unique drink that gets it's taste from Gosling's Black Seal Rum, and any other rum used in it's place is not a "Dark and Stormy".     That is what make it the distinctive cocktail that it is and not the "trademark".     Thor early "Dark and Stormy's" were made using Barritt's Ginger Beer until the partnership with Barritt's dissolved for an unknown reason and Gosling made their own "Gosling's Stormy Ginger Beer.    It is a good thing that the ginger beer isn't specified in the recipe.     The real issue is if you substitute another liquor or add an ingredient to this recipe don't call it a "Dark and Stormy".

The Dark and Stormy:
In a tall glass filled with cracked Ice add the Gosling's and top with Ginger Beer.    Garnish with a lime wedge.   Even the Garnish is not part of the official recipe.

Ther is only 1 other "Brand Specific" cocktail that I know of and that is the "Bacardi Cocktail" and I'll have to persue it's history and story in another article.     Meantime just get out and enjoy one of the fine tropical and refreshing "Dark and Stormy" cocktails at you favorite bar or even at home.    ;o)
Posted by Bahama Bob's Rumstyles at 9:18 AM No comments: