For the Spirits Business, Going Green Is a Matter Of Survival

Roberto Serrallés is a sixth-generation rum maker, which means he's a sixth generation waste recycler.
When Serrallés's family members first started distilling Don Q Rum on the island of Puerto Rico, they weren't specifically motivated by a love of spirits. Rather, they were looking to make use of the enormous waste created by their primary business-sugar.  "When you make sugar, your main byproduct is molasses," Serrallés says. From the 16th to the 20th century, sugar cane farms engulfed Puerto Rico. Before economic factors shifted sugar production to Brazil, India, and other nations, farmers on the island would harvest the sugarcane and strip its leaves. Instead of treating that excess foliage like trash, some extracted juice from the leaves and heated it to create a rich syrup. "And that became our raw material for making rum," Serrallés says.

In recent years, alcohol producers have begun to take a hard look at the sustainability of their practice. Technological innovation isn't easy or cheap. But in an industry that's dependent on healthy ecosystems for good ingredients, turning a blind eye to wasteful practices, unsustainable agriculture, and the effects of climate change on crops isn't an option.   "For every bottle [of rum], there are probably 10 other bottles of waste," Serrallés says. That may sound like an odd take on an old song ("99 Bottles of Beer," anyone?) but it's a fact that clearly keeps the rum maker up at night. "Our distillery produces around 400,000 gallons of wastewater every day," he continues. "It's just one distillery!" 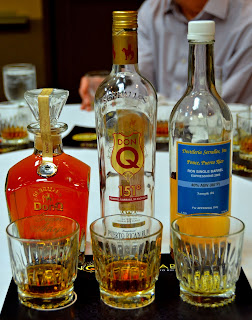 That's why Serrallés decided he had to get educated and change the game. In 2004, he returned from the University of Oregon with a Ph.D. in environmental science. In the decade since, he says Don Q Rum has invested $17 million in improving its sustainability practices.   Currently, Serrallés is working toward his goal of an entirely closed-loop distilling process, as he illustrates in an interactive sustainability chart on the Don Q website. Wastewater woes start the moment technicians feed the fermented molasses into the distillery drum. They push steam through the system, which moves the precious alcohol onto the next stage of the process, but leaves behind a puddle of nutrient-rich wastewater. Those organic sediments are liable to suck the oxygen out of any stream, lake, or ocean patch they settle in, depriving fish of essential gases, so dumping the water is banned by environmental laws. Fortunately, Don Q has got a good clean-up guy.

For now, the select producers who invest in sustainability do it out of a sense of duty-to the land, their community, and their brand's history. "My father said, 'what's good for the world is good for the wine world,'" Mariani-May explains. "He stood by that. It's timeless." But they do it out of a sense of foreboding, too. Many of their decisions are preparation for the environmental and regulatory changes that are yet to come. "Eventually, [other rum makers] will have to do the investments I have done," Serallés says. "We just got ahead of the game."

There is a lot more information in this story and it goes into how important that the spirits industry pay a lot more attention to what Roberto Serralles and the Manufactures of Don Q  Rum have done to keep the area that surrounds them in Ponce, Puerto Rico green and enjoyable for their neighbors and the rest of us on this planet.

Read More on this interesting story at https://www.popsci.com/booze-goes-green

Posted by Bahama Bob's Rumstyles at 5:28 AM No comments: