Back in the late 1600's and the early 1700's rum was known as "Kill Devil", mostly because of the firey burn it had.  In fact it was just plain rough.   In the early days of rum rationed out to the sailors of the British Admiralty it wasn't much better.  Most of the rum was more truly a distillate rather than a rum.  It was unaged and most of it was more like moonshine in its strength.

Admiral Edward Vernon was credited for Grog being the mandatory drink of the  British Navy in 1740  when Vernon was issued the infamous "Captain's Order Number 349.   This stated that all rum should be mixed with water,  a dash of brown sugar,and lime to make it more palatable. The sailors christened the weakened beverage after the admiral, from the grogram cloth cloak that he wore.

Grog has gone through a lot of modification over the nearly 300 years that it has been around, but the original recipe with just a cinnamon stick dropped in as a garnish and adding a dash of spice to the mix. 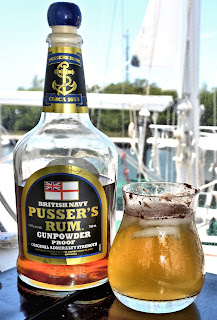 Pour all ingredients into a shaker with ice and shake until chilled and strain into a tumble filled with fresh ice.  Drop in a cinnamon stick to garnish and enhance the flavor.

Place all ingredients into a sauce pan and slowly bring to a boil.   Reduce heat to a slow boil for 5 minutes. Put into squeeze bottles and chill for a couple of hours before using.   Lasts about 2 weeks in the refrigerator.
Posted by Bahama Bob's Rumstyles at 5:37 AM No comments: