Tomorrow is Mount Gay Rum Day at the annual Quantum Key West 2013 Sailing Regatta.   I was lucky enough to be invited aboard the VIP Sailing Yacht America 2 for a day out on the water to observe the racing.  Mount Gay Rums have been a long time backer of sailing regattas all around the world for many many years.  It is a real honor to have been invited aboard for the day. 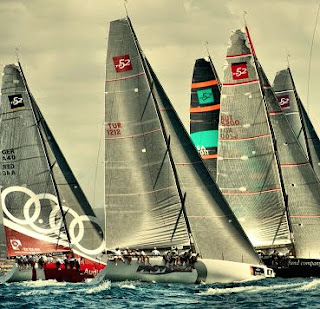 This is going to be a full day of watching some of the best sailors in the world dealing with the breezy waters off of Key West.   There are many many classes that will be competing in this years event and some 121 boats entered.   There will be a lot of close jiving and tacking as the day progresses.   I'
ll be there all day with my cameras to record the event and bring it to you on Thursday morning.

Of course there will be a chance to sample those fine Mount Gay Rums while aboard, It would not be a Mount Gay event with out the fine flavors of Barbados based Mount Gay Rum.

I'll keep you filled in on Facebook at Bahama Bob Leonard during the day as well as here on the blog on Thursday.  Thank You to Mount Gay and all the folks at Premiere Racing for the hospitality and the invitation.   ;o)

Posted by Bahama Bob's Rumstyles at 9:36 AM No comments: