The El Presidente earned its acclaim in Havana, Cuba during the 1920s staying very popular through the American Prohibition.  One story is that it was created by an American bartender, Eddie Woelke who named it after Mario Garcia Menochal soon after moving to Havana.

First accurately described in a 1919 article in the New York Evening Telegram, this Cuban mixture of “Bacardi, granatin and French vermouth” was apparently christened in honor of Mario García Menocal, president of that country from 1913 to 1921 and a man who didn’t mind throwing a lip over a cocktail.  Temperate people, the Cubans had only recently learned to appreciate the American mixed drink, but this one they liked. By the mid 1920s, the more discriminating among the massive influx of bibulous Yanquis that American Prohibition brought into the Queen City of the Caribbean had learned to like it too. 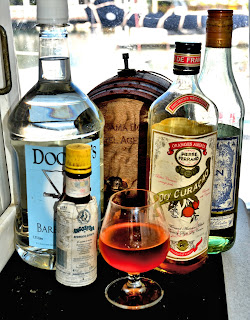 Place all ingredients except the orange zest in a mixing glass and stir.  Strain into a cocktail glass and garnish with an orange zest.