HISTORY OF THE DAIQUIRI by Cocktails 101 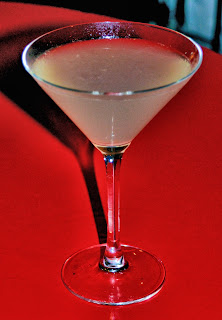 This is a well researched piece on the background and evolution of the daiquiri over the year.  This is a cocktail that I find to be one of the most versatile anywhere and a favorite for its flavor and simplicity. 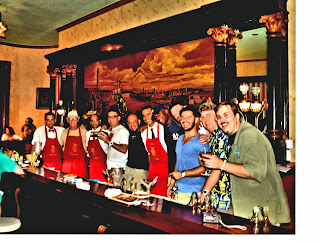 Ernest Hemingway put away 15 frozen daiquiris in one sitting, while John F. Kennedy sipped daiqs when he beat Nixon in the 1960 presidential election—at least according to legend. Today, daiquiris are the beloved beverage of cocktail aficionados and wannabe vacationers to the newly reopened Cuba. Below, every single thing you need to know about one of the most classic of classic cocktails—history, tips and techniques, recipes, and variations.

While most vintage drinks lack documentation proving their precise point of creation, the daiquiri's origin is backed up by an actual cocktail recipe card signed by a "Jennings Cox" in 1896.
Cox, an American engineer who lived and worked in Cuba after the Spanish-American War, is believed to have invented the daiquiri after running out of gin while throwing a cocktail party. Since rum is plentiful in the country, it proved a convenient substitute in a punch he was serving. Unlike what's stated on his recipe card, the drink was made with limes—since lemons were unheard of in Cuba—and brown sugar. It turned out to be a huge hit, and Cox christened it the "Daiquiri," naming the drink after a nearby port town, which also happened to be where the U.S. first invaded Cuba during the Spanish-American War. 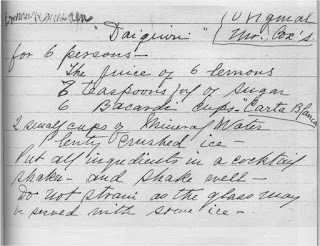 However, considering the island has a bounty of lime, sugar, and rum, it's likely that Cox was merely the first to pen the recipe of a cocktail that had already existed in Cuba. Not to mention that a prototype of the daiquiri—"grog" with lime juice, sugar, rum, and water—had been saving the British Royal Navy from scurvy for centuries before. And variations of rum-lime-sugar drinks previously populated Cuba (el draque, the precursor to the mojito, was invented by Sir Francis Drake during the 1500s) and the Caribbean (ti' punch from 1887). 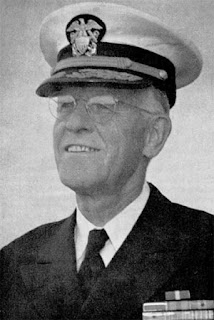 But, in 1909, Cox's cocktail, which until then could only be found in Cuba, was brought to America by Admiral Lucius W. Johnson. The U.S. naval officer, who had visited Cox and fell in love with his daiquiri, introduced it to Washington, D.C.'s Army and Navy Club.
Then, four years later, bartender Emilio "El Maragato" Gonzalez of Havana's Hotel Plaza started serving the daiquiri up, shaken and strained into a coupe glass, as opposed to shaken and poured into an ice-filled flute. He also swapped in white sugar for brown sugar. This new presentation, along with the sweetener switch, allowed the rum to shine. Plus, it wasn't as diluted.
Between the 1920s and 1930s in Cuba, the daiquiri underwent an important transformation. Constantino "Constante" Ribalaigua Vert, bartender and owner of a little bar in Havana called El Floridita, perfected the drink with just shaved ice and the whir of an electric blender. And the frozen daiquiri was born. 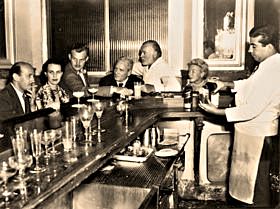 Soon after, Ernest Hemingway, who was living in Cuba, happened into the bar and, after sampling Constante's frozen creation, requested it sans sugar and with double the rum on account of his diabetes. This, of course, made the cocktail conducive to epic drinking sessions and motivated Hemingway to become a bar regular. In one account from Berry's book, Hemingway put away 15 double frozen daiquiris in one sitting. This earned the cocktail a permanent spot on Floridita's menu as the "E. Hemmingway [sic] Special."


Papa Hemingway's super tart recipe eventually evolved to the more drinkable Hemingway Daiquiri, a classic that now includes grapefruit juice and maraschino liqueur, in addition to rum and lime.
Read More at http://www.eater.com/drinks/2016/5/12/11327350/daiquiri-cocktail-recipe-rum-lime-cuban-drink
Posted by Bahama Bob's Rumstyles at 6:03 AM No comments: