The Train Came to Key West.

It was called the Eighth Wonder of the World at the time and today the highway that it spawned is still right up there as an engineering marvel.     This was the Henry Flagler's idea to be able to take advantage of the United States closest deep water port the the Panama Canal and to take advantage of the Cuban and Latin American  trade potential. 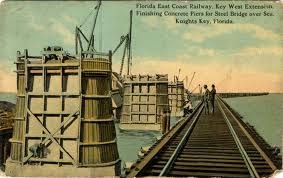 Shortly after the announcement of the construction of the Panama Canal in 1905, Flagler became interested in connecting Key West to the Mainland.     Initially it was called "Flagler's Folly", but at it's completion in 1912 a proud Henry Flagler rode aboard his private rail car on the first train to Key West.     The project came with a steep price tag of money and very special engineering innovations.    There were three hurricanes that threatened the project, and a final price tag of more that $50 million. 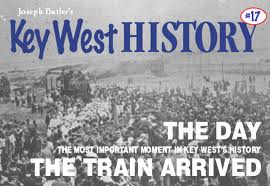 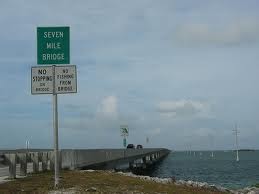 The demise of the Overseas Railroad came on Labor Day, 1935 when a category 5 hurricane, later labeled "The Storm of the Century" devastated Long Key and the adjacent areas.     Much of the Overseas Railroad was heavily damaged by the storm as well as the Florida East Coast rescue train that was blown over with the exception of the locomotive by the storm surge.     The already bankrupt Florida East Coast Railway was unable to financially recover and rebuild the road bed and the bridges, so they sold the entire line to the State of Florida who built the Overseas Highway using the road bed.
The impact of "Flagler's Folly" on the Keys sis still being felt today, from the ability to drive to and from the mainland and bring goods by truck on a daily basis is something that the Keys can not do without.       We will be looking at some of the other effects of the Overseas Railroad in future articles.
Posted by Bahama Bob's Rumstyles at 9:08 AM No comments: