Well today is election day here in the United States, most of us feel like we will need some sort of a pain killing cocktail before the day is over and the results announced.  Here is a good idea for a grass roots, earthy, grounded cocktail for your afternoon or evening.
Apples are in season right now and you can't find a better time for apple based cocktails.  Here is an idea for a appletini made with unsweetened organic apple sauce.  The applesauce, the rum, the vermouth and the syrup unite to give you a wonderful apple cinnamon base to a great sipping martini that has a little bit of substance to it. 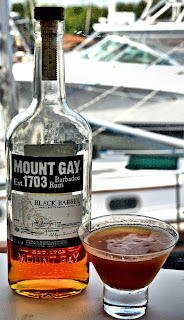 Place all ingredients in a shaker filled with ice, shake until thoroughly chilled and strain into a chilled cocktail glass.  Garnish with a lemon zest.

Place all ingredients except the water and cinnamon in a pan and heat at 375 degrees stirring until all melts into a liquid.  Slowly add the water and bring to a boil.  Add Cinnamon and reduce heat to 230 degrees and bring to a slow boil and continue stirring for 5 minutes.  Pour into a dish that will not melt or crack and place in refrigerator for about an hour.  Pour into a dispensing bottle and put into refrigerator until ready to use.
Posted by Bahama Bob's Rumstyles at 5:59 AM No comments: