There has been a lot of discussion and debate over the use of the "Rum Cover-Over Rebates", a law that has been renewed most recently as pork on to the "Fiscal Cliff" legislation in January.   This is a refund based on the excise tax collected on rums that are sold to the mainland of the United States.  The program began for Puerto Rico with the Jones Act in 1917, and the U.S. Virgin Islands were added in 1954.

What does all of this mean and who does it really benefit?    The "West Indies Rum and Spirits Producers Association" (WIRSPA) seem to be trying to get the public to believe that it is having dire effects on all of the other rum producers of the Caribbean, but in talking to Richard L. Seale, it is really only the bulk rum producers, the ones that make the cheap distillate sold in bulk to produce many of the $14.00 bottles of rum on the shelves in America.    According to Mr. Seale,  the companies that are making premium and aged rums, they can command a strong enough price for their products to sustain themselves.    Mr. Seale believes that the rum industry as a category is being slowed in its growth by the large amounts of low grade rums on the market.  There is too much attention being paid to this group because of large advertisement budgets and a corporate welfare program in the U.S. Territories  to support them.

In order for rum to become a strong spirit like Bourbon or Scotch, there has to be more emphasis put on the higher end and higher quality rums.   There are very few names in the world of rum that will command the prices of the high end scotches and bourbons.   Richard feels that if there were less of this bulk rum and more interest by the category toward the better quality rums, the entire industry would grow in a way that is sustainable.   Rum is still for the beginning drinker, and few middle and older age drinkers see rum as a sipping spirit.   It is this issue that will limit the growth or the category in general. 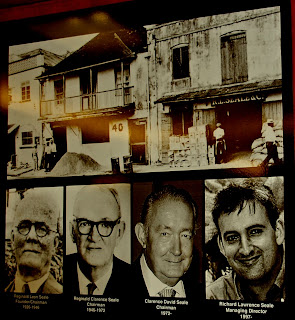 I have found that very few of my Rum Bar customers walk in knowing what rum is about other than Bacardi Superior or Captain Morgan, inexpensive spirits that they drank as kids because it was cheap and all they cared about was getting a "Buzz".   They would mix it with a coke or something else, so it didn't matter what it tasted like.  Most of this rum consumption with sugary mixes are not remembered, but the huge hangover the next morning is what is remembered of drinking rum.   It is hard to get people to try rum again when all they remember from their younger days is the hangover.

I feel Richard L. Seale is right on point about the cover-over rebates in that they are only really corporate welfare for the bulk rum producers.   The producers of quality aged rums are feeling the effect of this corporate welfare.   Richard L. Seale and Foursquare Distillery is one of the finest rum producers in the world, his rum do the talking for him.  Quality in rum is what will make this category grow, not the proliferation of all these unaged sugared, colored and vanilla added mass market "rums".    The category is crying for quality, but the perception of the American rum drinker is one of low quality artificially flavored rums and no knowledge of the better honest rums that are available.   Take some time to enjoy a true and honest rum, you will be surprised as so many of my customers have been by quality and smoothness of the rums.

I'd like to thank Richard L. Seale for taking some time out of his busy schedule at the Miami Rum Renaissance Festival to sit down and talk with me on the subject of rum, tax rebates, and the category's needs to move to the next level.   I hope that the category  in general will put more interest in the production of more quality rums and less time trying to produce rums that artificially try to be something they really are not.   Enjoy a great rum, it is a very special experience and one you won't ever forget.  ;o)

Posted by Bahama Bob's Rumstyles at 9:38 AM No comments: