Are we "Drunk" When We Fall in Love?

An article in the Spirits Industry, tells us that science says that we are.   I seems that the effects of the “love hormone” oxytocin have very similar effects on the body as those of alcohol.  This is a very interesting article, maybe  Beyonce was right with her video, "Drunk in Love"  (www.youtube.com/watch?v=p1JPKLa-Ofc ).


The research found distinct similarities between the effects of alcohol and oxytocin on our actions.   Oxytocin is a brain chemical which plays a key role in social interactions and reactions to “romantic partners”, increasing behaviors such as altruism, generosity, empathy, and trust.   The research, conducted by the University of Birmingham and published in the journal Neuroscience and Bio-behavioral Reviews, used data from existing studies on the two compounds, and found distinct similarities between the effects of both. 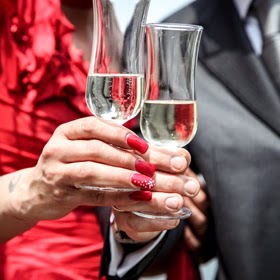 Dr. Ian Mitchell, from the School of Psychology at the University of Birmingham, explained: “We thought it was an area worth exploring, so we pooled existing research into the effects of both oxytocin and alcohol and were struck by the incredible similarities between the two compounds.”   “They appear to target different receptors within the brain, but cause common actions on GABA transmission in the prefrontal cortex and the limbic structures. These neural circuits control how we perceive stress or anxiety, especially in social situations such as interviews, or perhaps even plucking up the courage to ask somebody on a date. Taking compounds such as oxytocin and alcohol can make these situations seem less daunting.”
The research revealed that although the two compounds target different receptors in the brain, they cause a common action on the parts of the brain that control how stress and anxiety is dealt with.     The result is lowered inhibitions, especially in situations seen as “stressful”– such as going on a first date.


Dr. Steven Gillespie said: “The idea of ‘Dutch courage’ – having a drink to overcome nerves – is used to battle those immediate obstacles of fear and anxiety. Oxytocin appears to mirror these effects in the lab.”   However, like alcohol, oxytocin can also make people become more aggressive, envious or boastful, while reducing the sense of “fear”.
You can Read more at  http://www.thespiritsbusiness.com/2015/05/drunk-in-love-concept-backed-by-science/?article-source=newsletter&source=431&date=2015-05-21
The concept has been around for many years of being drunk in love,  I guess that it is true.    I find it interesting that it has taken this long for someone to research the subject and bring it out to the public.   ;o)